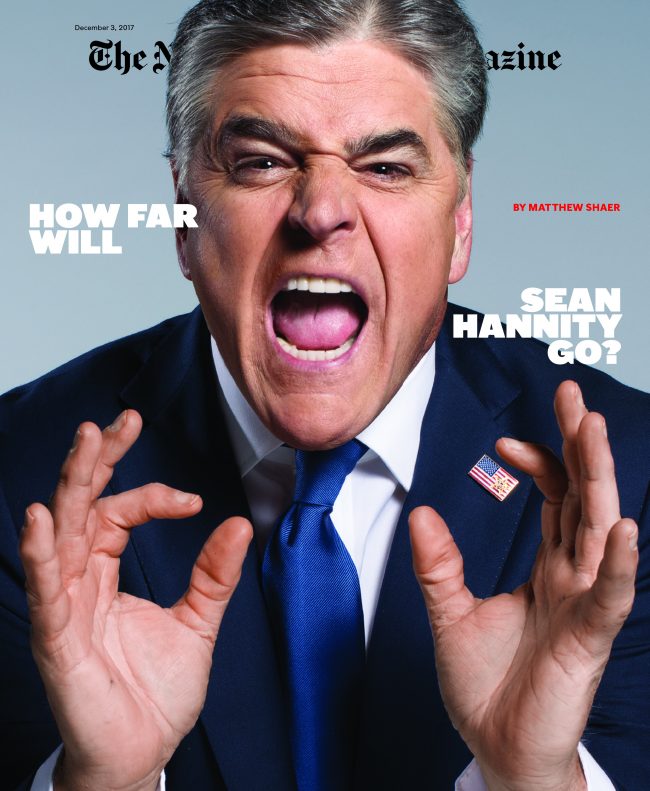 Well, this is a predictable media dust-up.

The New York Times Magazine published a long-form profile of Fox News primetime host Sean Hannity, Tuesday, which paints the proudly conservative firebrand in a remarkably fair and humanizing manner. Humanizing because it’s not unfair to surmise that the majority of NY Times readers see Hannity as a one-dimensional cartoon character. This essay reveals that he’s actually a real human being who was raised in a manner that logically brought him to his current political beliefs.

But there is still a bit of controversy to be found here — not necessarily within the piece itself, but rather, the cover shot featuring the classic “Angry Conservative” shot which only reinforces the caricature that Times readers likely believe to be true.

According to a source in attendance at the November 8th photo shoot conducted at Fox News offices, the supposed “aggrieved Hannity” shot used as the cover was only posed by Hannity as a joke with the photographer. As is the case with these sorts of shoots, there were likely hundreds, if not thousands, of pictures taken. And only one of those images depicted a self-aware Hannity playing the part of angry conservative — ostensibly mocking how he assumed he’d be portrayed by what he sees as a liberally biased outlet. Turns out he was right.

The brouhaha over the cover photo is a shame — as the profile itself is a nuanced, thoughtful and fair portrayal of the currently top-rated political lightning rod. Not surprisingly, Hannity took issue with this cover, tweeting:

And the NY Times has something of a predictable pattern of portraying progressive icons in a most flattering light (see CNN’s Jeff Zucker, indie filmmaker Spike Lee and original Wikileaks discloser Chelsea Manning for example.)

Cheers to writer Matthew Shaer and the piece’s editors for a balanced, measured examination of their subject. But jeers to the magazine’s Editor-in-Chief, Creative Director and Photo Editor for playing right into the right-of-center conspiracy theories that many mainstream outlets such as the Times are out to get them.