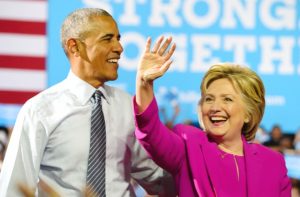 As it looked like Donald Trump was going to win on election night, there was a lot of talk about why Hillary Clinton wasn’t coming out to concede. Well, an upcoming book on the election says President Obama thought she should have.

Clinton did not publicly concede until Wednesday morning, though she did call Trump late into the night to concede over the phone.

And according to The Hill, the president himself may have pushed Clinton make the concession call.

An upcoming book on the election by The Hill’s Amie Parnes and Roll Call’s Jonathan Allen contains this revelation:

“You need to concede,” Obama told his former secretary of State as she, her family, and her top aides continued to watch results trickle in from the key Rust Belt states of Michigan, Wisconsin and Pennsylvania…

“There was a lot of discussion about Michigan and Wisconsin and whether the numbers could flip it,” said one of the sources, all of whom spoke on the condition of anonymity. This source said the final numbers were so close that Clinton might not have placed her call to Trump without a push.

“If anybody knew what actually happened that night, no one would have conceded,” the source said.

And as Parnes tweeted out earlier, Obama made the call around the time John Podesta addressed Clinton’s supporters:

Called her to concede around the time Podesta went to Javits Center… https://t.co/uqwPQbboTG