Obama Rumored to Be Making Appearance at Emmy Awards (UPDATED) 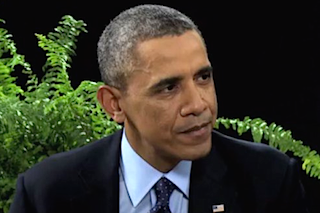 The E! network has apparently put fuel to the fire of a rumor that President Barack Obama will be making some sort of appearance at tonight’s Primetime Emmy Awards. Because the show is happening in Los Angeles and the president is by all accounts still back on the east coast, any potential appearance will almost definitely occur via pre-taped video or live satellite.

The episode of Funny or Die’s Between Two Ferns in which the president appeared alongside Zach Galifianakis in order to push sign-ups for the Affordable Care Act won the award for Outstanding Short-Form Live-Action Entertainment Program at the Creative Arts Emmys in a previous ceremony. Perhaps his appearance will reunite him for yet another intentionally awkward interview.

The Huffington Post’s Ethan Klapper threw some cold water on the rumors via Twitter, but left the door open for the possible video appearance:

If you're watching E!, no, President Obama will not be at the #Emmys.

When I said Obama won't be at the #Emmys I meant not in person. He's in D.C. and a lid's been called. But nothing precluding him from video.

Watch the award-winning video below, via Funny or Die: