Wilstein: Obamacare Numbers Prove GOP Right, But Not in the Way You’re Thinking 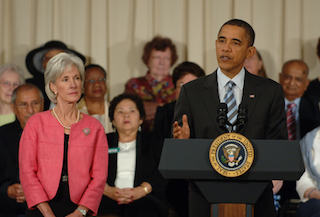 Republicans and other critics of President Barack Obama’s Affordable Care Act are celebrating today on news that only 106,185 people have signed up for health insurance under the law since it went into effect on October 1st. That’s about 20% of the Obama Administration’s 500,000 goal for the first month and a long way to the 7 million they want to see enrolled by March 31st.

With the endlessly-reported problems over at HealthCare.gov, no one should be surprised that the total number of enrollees is lower than anyone on Obamacare’s side would have liked. But the far more telling numbers come in the breakdown of people who signed up using the federal program vs. those who enrolled using state-based exchanges. Only 26,794 people signed up using the system on HealthCare.gov, or about 25% of the total. That means 79,391 people signed up using state-based exchanges, which only exist in 14 states and the District of Columbia.

California, the largest of the states that have exchanges managed to sign up more than 35,000 people, or about one third of the total. Combined with New York, another state that has embraced the process, the two states represent 49% of the total sign-ups. And Kentucky, one of the only “red state” that implemented an exchange–thanks to its progressive Governor Steve Beshear–has enrolled 5,586 people, putting fourth on the list of states with the most enrollees.

As for states where Republican governors have blocked efforts to set up state-based exchanges, their numbers are often comically low. North Dakota is dead last with 42 sign-ups, followed by Alaska with 53 and South Dakota with 58. Sure, those are sparsely-populated states with plenty of residents who would probably resist signing up for Obamacare out of spite towards President Obama alone. But if they had their own state-based programs, you have to think those numbers would have risen far beyond the double digits.

What if all 50 states had done as the administration originally advised and set up their own state-based websites? According to “rough calculations” done by Obamacare-watcher Allan Joseph, if every state had enrolled its uninsured residents at the same rate as those 14 states, there would be an additional 125,000-150,000 people signed up. That would put the administration a lot closer to its 500,000 goal.

And isn’t this state-based approach what Republicans should have wanted all along? The GOP has spent decades arguing that things like education and fiscal policy should be handled at the state level so why not health care? By failing to properly implement a national health insurance website, Democrats inadvertently proved conservatives who believe in a limited federal government right.

The irony is that it’s liberal states like California and New York that took up the states’ rights banner, building their own health care exchanges and outdoing the federal government in the process. Meanwhile, states like Texas, which has the highest rate of uninsured residents in the country, forced people to use the dysfunctional federal system. Over the course of October, Texas enrolled just 2,991 of its more than 6 million uninsured residents.

As disappointed as they are, the numbers announced Wednesday are not the outright “disaster” that pundits on Fox News were claiming before they were even revealed. And while Republicans on Capitol Hill are reportedly saying “I told you so” to Democrats, they are saying it about the wrong thing.

If the low numbers one month in prove anything–besides the fact that HealthCare.gov has major problems, which everyone on the planet already knew–they prove what Republicans were saying long before the term “Obamacare” existed: There are some things that work better when the federal government steps back and individual states tailor solutions that work best for them. If only Republican-run states had heeded that advice from the beginning. It’s almost as if they wanted Obamacare to fail.