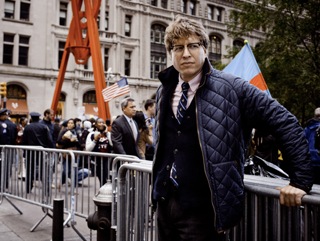 One of the more bizarre but inevitable side effects of the Occupy Wall Street movement has been the blossoming of celebrity in otherwise barren Zuccotti Park, and, ironically, no greater personality has risen out of the movement than Community Affairs Detective Rick Lee, the “Hipster Cop.” Lee has been profiled in the New York Times and the Washington Post, and today graces the digital pages of GQ in an exclusive interview. But having ruffled the feathers from the more suspicious members of the movement, how does Lee come out, politically, from the fruits of his newfound fame?

For the most part, Lee’s rise to internet celebrity was a product of his dapper fashion sense, and interactions with members of the press (notably Gawker’s Adrian Chen) where he said things like “Radiohead is finished” and “I wear skinny jeans off-duty.” The folks at Styleite took a look at what his fashion sense means, but here at Mediaite, it is Lee’s political impact that piques our interest. For one, not every protester considers Lee a funny sideshow. Gothamist initially declared him to be a dangerous “distraction” from police brutality. The protesters at Sparrow Media put together a video to help protesters identify Lee warning, “Hipster Cop is part of the process of intimidation, ridicule, and violence being levied against us.”

RELATED: Pete Seeger And Arlo Guthrie Jam Out At Occupy Columbus Circle With ‘This Little Light’

So when actually confronted about his views, how does Lee compare to the suspicious figure some protesters think he is? Well, he pays taxes, so he understands the 99% concept. But:

GQ: Are you sympathetic to the movement?

Rick Lee: It’s hard to say that because everyone in the Park has their own agenda of why they’re here. Like I could talk to a guy and he could be upset that he gets taxed, and I can understand that because I get taxed every two weeks when I get paid. But somebody else might be into, like, Communism or something. Which I’m not really into. I can’t relate politically that way. But people have their right to voice their opinion in America. They have a right to demonstrate. It’s a good thing. But there’s probably 200 people in the park right now and 400 different opinions of why they’re here. Though, generally, a lot of well-read, very smart, very articulate people are here. I’ve become friends with a few people. It’s kinda cool.

Plus, he replies with an adamant “no!” when asked if he thinks the protesters have good fashion sense, dismissing them as “grunge.”

RELATED: Alec Baldwin Visits Occupy Wall Street, Does Not Appreciate You Bringing Up His Brother

It is fair to say that, in a news story that is all sturm und drang, the media is trying fairly hard to find some levity, a sense that the protesters are not entirely correct when they say the system is irreparably broken. And in some ways, the rise of a good-natured, dashing police officer who is just doing his job and would rather not antagonize anyone for anything more than their bad haircuts is a natural manifestation of that desire to bring good news to an audience starved for it for the better of a decade. We’ve seen levity in all its forms in the past couple of years. In the throes of one of the worst environmental disasters in American history, we had BP CEO Tony Hayward on a yacht. In August 2010, perhaps the worst single month of media in the decade, Steven Slater lived out every disgruntled employee’s fantasy. Rick Lee is now just a reincarnation of that– one that those who take the protests very seriously may look askance at, but nonetheless lightens the burden on the average news consumer trying to remain optimistic in the face of the 24-hour downer cycle that is the American news media.