Occupy Wall St, The NYPD And The Media: Reconsidering ‘Press Passes’ In A Digital Age 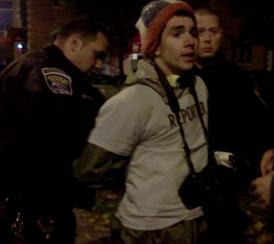 One of the most sizzling parts of the Occupy Wall Street steak, from a media perspective, has been the conduct of police in dealing with the protests. With the number of arrests at Occupy protests now past the 4,000 mark, the arrests of journalists by the NYPD has become a major subplot. Mayor Bloomberg’s office has sought refuge behind their credentialing process, a red herring that The New York Observer‘s Elizabeth Spiers has gobbled up, nonetheless. Credentialed or not, reporters shouldn’t be rounded up under weak pretexts any more than citizens should.

On Thursday, The Awl presented a list of 26 reporters who have been arrested by the NYPD in connection with Occupy Wall Street. Stu Loeser, spokesman for New York Mayor Mike Bloomberg, responded with a memo so dickish, it ought to be framed in the John Holmes Wing of the Smithsonian. His basic point was that, of the 26 arrested “reporters” (scare-quotes are his, not mine), only five had valid NYPD credentials. I’m not sure what kind of a defense that was, since even if all 26 had carried credentials, they apparently weren’t worth the lanyards they hung from.

Aside from the question of whether credentialing by law enforcement is appropriate in the first place (inasmuch as it can potentially conflict with first amendment protections), the NYPD’s processes for acquiring credentials are, to put it nicely, Kafkaesque. To put it bluntly: they’re ridiculous.

I won’t reprint them here, but you can check them out for yourself. Spiers misreads the eligibility criteria as requiring a reporter to “(break) the law repeatedly” (by crossing police lines, etc., as an uncredentialed reporter) in order to rate a credential. In reality, a reporter can meet the eligibility requirements by covering six open press events in two years.

Spiers argues that these requirements keep out editors for legit news organizations, who don’t get into the field much. Now, hitting an open press event once every four months isn’t that onerous, but she does have a point, which I’ll get to later.

In the age of the citizen journalist, there are compelling arguments for favoring the democratization of journalism whenever possible, and as a self-made “graduate” of that school, I bristle at Loeser’s condescending attitude toward non-traditional journalists. However, there are two key points to recognize here.

First, there are very good reasons for the police not to issue credentials to anyone who asks for one. Credentials allow reporters access to otherwise restricted areas, and reporters can also apply for special parking permits. It’s in everyone’s interest, especially established reporters (new media or not), that the police not allow news events to become clogged by every looky-loo with a flipcam and a blog.

Second, this seems to promote the idea that a reporter can’t report without a police credential. That’s obviously not true, and as Loeser’s response makes clear, the credential itself isn’t all that helpful sometimes. I’ve been covering protests, rallies, and other political events for four years now without ever even trying to get a police press card.

Where Spiers has a legitimate gripe is in her inability, as an editor, to get a press pass. As a member of a legitimate news organization, she ought to rate, and there should be a venue for her to reach out and get one. This points up the fundamental problem in this whole story: the City’s default hostility to the press, as expressed by Loeser’s response, and the NYPD’s actions. There should be someone in the city’s press office who has a relationship with editors like Spiers, and whose objective it is to find ways to grant access, not look for reasons to deny it.

In much the same way, the police should be looking for reasons not to arrest reporters. Loeser tweeted to NY Observer editor Megan McCarthy:

@megan, you don’t have a press pass; that’s your option. But why should some random NYPD take your word that you’re press?

That’s a false choice between taking someone’s word for it, and arresting them. Police officers should be expected to exercise good judgment. Where OWS is concerned, though, that judgment appears to be fixed around an “arrest now, ask questions later” strategy, as evidenced by the chart buried at the end of Loeser’s memo. Three of the seven reporters listed were arrested for “disorderly conduct,” a pretextual catch-all that allows police to haul you off to the hoosegow, regardless of whether the charge sticks.

This kind of policing is especially effective with protests, as the physical presence of demonstrators is not only crucial to the process, it is the process. That goes double for reporters, whose effectiveness in covering protests, and holding them and police accountable, depends entirely on their physical presence there. The fact that the NYPD rounded up 26 reporters, without regard for their credentials, demonstrates a policing strategy that is at odds with American democracy, which depends on a free press to survive. The fact that some of these reporters had their arrests voided is immaterial; because of these arrests, they were not there. Mission accomplished.

(photo via The Awl)