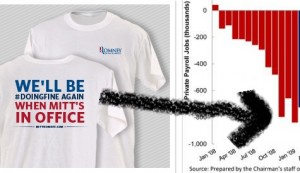 In an attempt to squeeze every last drop of political fuel from President Obama‘s “The private sector is doing fine” gaffe, Republican presidential candidate Mitt Romney may have inadvertently lit itself on fire. The former Massachusetts Governor’s campaign is now hawking $30 t-shirts featuring the slogan ““We’ll be #doingfine again when Mitt’s in office.”

The emphasis on the word “again” is mine, as it seems to be saying that things were hunky-dory on Jan. 19, 2009, and there’s no context to rescue the sentiment.

While President Obama clarified his remark to indicate that he was contrasting the private sector, which has added 4.2 million jobs over the past 27 months, with the public sector, which has shed around 700,000 jobs since the President took office, there doesn’t seem to be any mistaking Romney’s intent here: we were “doing fine” when the economy was melting down, and we’ll be doing similarly “fine” when Mitt takes office.

Perhaps the confusion lies, not with the word “again,” but with the word “we.” Although corporate profits have risen to record levels under President Obama, in part by cutting costs like labor, there can always be more money funneled to the wealthiest Americans, especially if one of them is running things. Romney, and guys like him, are doing everything in their considerable power to make sure that happens.

What Mitt Romney doesn’t mean when he says “we” are the police, firemen, and teachers whose jobs he was glad to shed, or the people whom they used to serve. Folks like Romney, and the billionaires who are financing his run against President Obama, don’t have much to worry about if there are a couple fewer cops around, and if things get really bad, they can just have Mitt throw on the uniform himself.