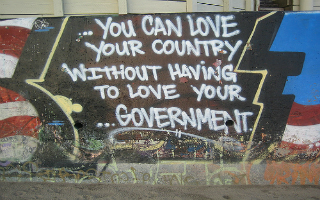 Libertarianism, a resurgent ideology that is confoundingly on the retreat within the more friendly of America’s two major political parties, represents a fascinating case study in both grassroots political success and failure. The ideology, and the party as well, have had some major victories as well as some devastating defeats over the last four years. A libertarian philosophy has much to offer American politics, but they have thus far been unsuccessful at attracting a broader audience for their policy prescription to the nation’s nagging problems. What’s more, supporters of mainstream libertarianism seem more inclined to isolate themselves from criticism. Libertarianism is an important element to American politics – but it will not achieve a wider acceptance among the electorate if the task of mainstreaming the ideology is left to its present practitioners.

RELATED: Which Party Is Looking Out For Your Civil Liberties?

The financial crisis that began in 2008 with the collapse of the mortgage-based derivatives market forced both Democrats and Republicans to reevaluate their legislative priorities. While traditional Democrats and left-leaning progressives found new impetus to push for legislation that favored “fairness” and “equality” in financial markets – not to mention an expansion of the social safety net for those most exposed to the economic downturn – Republicans found new reason to return to their fiscally conservative roots.

Compounded by Sen. John McCain’s loss to President Barack Obama in 2008, Republican voters repudiated their “compassionate” wing; a branch of Republicanism that was happy to oversee the growth of the state, so long as it could be managed and directed in the most politically advantageous of ways. Welfare programs like the Medicare Part D prescription drug benefit and the No Child Left Behind education reform law, championed by President George W. Bush and his Republican-led Congressional majorities, came to symbolize a GOP that had lost its way.

But in the light of the new reality ushered in by the financial crisis, Republicans found that these programs – formerly buoyed by America’s once ever-expanding largess – were simply unjustifiable. Those program’s short-lived successes were outweighed by their costs. It was in this political environment, amid a thorough repudiation of Bush-era Republicans, that the GOP embraced their libertarian wing.

The tea party movement, born spontaneously in early 2009, drew heavily from the libertarian grassroots organizations that were already active and viciously opposed to the big government wing of the conservative party. As the average Republican found new value in the tenets of mainstream libertarianism, (sound currency, a less interventionist foreign policy and reduced government intervention into the private sector to name a few examples) it seemed clear that the national GOP would quickly follow suit.

The 2010 midterm elections suggested that this transformation was well underway, but somewhere along the line the Republican party’s drift towards libertarianism halted. It would be a mistake for libertarians to blame the loss of this opportunity to secure a critical level of influence over the GOP as the result some cabal of establishment-types working behind the scenes to shut them out. Worse, libertarians should avoid consoling themselves in the belief that Republican voters were simply cowed by sharp advertising or too close minded to embrace a libertarian philosophy. No, it was the base of the libertarian movement that sabotaged its own rise.

The Weekly Standard’s Mark Hemmingway outlines the follies of the libertarian movement in the magazine’s most recent issue. In his article, he chronicles the small ball issues that the libertarian movement seems to obsess over. The legalization of marijuana and prostitution are among libertarianism’s most favored causes that simply do not resonate outside the bounds of the ideologies most faithful adherents.

Furthermore, Hemmingway notes how mainstream libertarians embrace conspiratorial notions that Republican officeholders eschew. “[W]hen you start inquiring about the economy, the talk escalates quickly from paper currency to conspiracy,” Hemmingway writes. “On a Libertarian message board, you’re often just one click away from a frightfully earnest conversation about the Bilderbergers and the Rothschilds.”

While GOP leaders have done all within the power to tamp down foolish conspiratorial notions about, for example, President Obama’s parentage and place of birth, libertarian leaders are often guilty of legitimizing conspiracy theories among their faithful supporters.

Texas Rep. Ron Paul, a longtime standard bearer for an ideology that fundamentally mistrusts government with a devoted following that any politician would envy, failed to capture the admiration of the GOP despite running for president in the most fertile, pro-libertarian environment in a generation.

On Monday, Politifact noted that Ron Paul’s undying presidential campaign’s message to supporters, that he has up to 200 delegates prepared to cast their votes for him over Massachusetts Gov. Mitt Romney, was false – it’s closer to 160.

Paul seems intent on, and his supporters would accept nothing less than, disrupting the political comity that traditionally characterizes presidential nominating conventions. The healing process and the unity which precedes a general election are of no interest to Paul’s supporters. Indeed, their radical, unruly inclinations have been fostered and cultivated by Paul and his campaign. This is not the behavior of a responsible, participatory wing of a political party.

Paul’s campaign has done more damage to the libertarian brand of Republicanism than anything else – particularly among rank and file GOP voters. Libertarianism’s draw continues to be the ideology’s espousal of a softer touch towards social issues in contrast to the traditionally interventionist inclinations of a thankfully bygone era of Republicanism. But their aggressive, conspiratorial position on precious metal-based currency and interventionism abroad (attributing malicious and base motives to any that oppose their policy proscription) turned off a broader coalition of Republican voters.

Today, libertarianism risks their tangible gains in the last two years. The measurably more inclusive stance towards gay marriage and the legalization of certain prohibited intoxicants among Republican voters is now subject to serious pushback from a resurgent GOP establishment. Libertarianism is on the retreat on all fronts.

Furthermore, the big “L” Libertarian party has fielded former New Mexico Gov. Gary Johnson to run as their presidential candidate – a third party run that has as much potential to spoil the election for Republicans as it has to alienate average GOP voters who value a victory over President Obama more than any ideological position.

The libertarian voter can find a home in the GOP, and the Republican party’s big tent should accommodate these right-of-center voters. However, libertarianism needs to take stock of its failures. It has been unable to attract a broader audience and the traditional libertarian seems less inclined to perform an introspective analysis about the reasons for this condition than to lash out at the non-believers. This is a road map straight into the political wilderness.

Libertarians would do well to learn what worked so well in 2009-2010 and what has failed dismally in 2011-2012. The ideology had some great successes, and pushed the GOP towards a position more politically attractive position for moderate and independent voters. But they risk sacrificing their gains by being inflexible and intolerant. Libertarians could the GOP in their direction or they could take their ball and go home. The average libertarian seems more inclined towards the latter course. The nation, and the Republican party, will be worse off if they do – but they would not be to blame. It would be the libertarians that sacrificed political success for ideological purity.