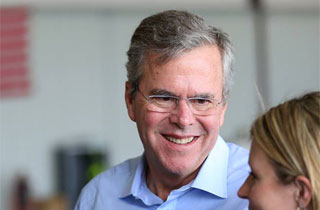 Last week, Jeb Bush had to perform the Dance of Seven Clarifications after he misheard a question and answered that he would have invaded Iraq in 2003. As it turns out, knowing what we now know, he would not have invaded Iraq.

But you’d think that Jeb, knowing what he knows now, would try a better tactic to finesse his way around that question without undermining his brother, George W. Bush. According to an MSNBC report from today’s trip to Portsmouth, NH, he just can’t do it yet:

“The focus should be ‘Knowing what we know now, Mr. President, should you have kept 10,000 troops in Iraq?’” Bush said. “ISIS didn’t exist when my brother was president. Al Qaeda in Iraq was wiped out when my brother was president. There were mistakes made in Iraq for sure, but the surge created a fragile but stable Iraq that the president could have built on and it would have not allowed ISIS [to grow].”

According to Bush, [Barack] Obama “abandoned” Iraq based on “popular sentiment” against leaving troops behind. He said that decision loomed even larger this week now that the U.S.-backed Iraqi government had withdrawn from the key city of Ramadi in the face of an ISIS assault.

“You think about the family members who lost -— our blood and treasure’s in Ramadi and they won, they won that battle,” he said. “It was hard fought and that stability has been lost.”

Critics immediately pounced on that statement, pointing out that in 2008, W. Bush signed an agreement with the Iraqi government to withdraw all troops from Iraq. Politifact noted earlier that the 2008 agreement had “no stipulations about a specific number of American military personnel to be left behind,” and that when Obama attempted to renegotiate the deal to include a small number of troops left behind, the talks broke down after Iraq refused to grant prosecutorial immunity to American troops. (They rated Bush’s talking point “mostly false” when he trotted it out last week.)

By now, it should be painfully obvious that when someone named “Bush” says something positive about their relation’s handling of Iraq, it’s gonna be rough for everyone involved. (And since “everyone involved” means “America”, this is gonna be real rough.)