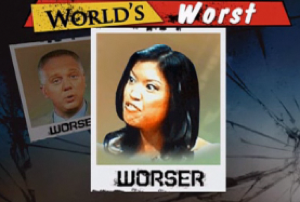 Keith’s ire stems from Malkin’s pot-stirring about the New Jersey school that had some kids perform a song honoring the President.  While I’m in 100% agreement with Keith that this uproar is bogus, and a crass exploitation of these kids for political gain, there are a few problems with Keith’s commentary.  Here’s the segment.

The only thing I even mildly agree with Michelle Malkin about is that I’m awesome.  Her website is chock full of repugnant conservative smears, and she’s not known for parsing her words, either.  None of this, however, explains why Keith Olbermann would refer to her in such dehumanizing terms, even as he’s decrying that exact behavior.

As to the substance of Olbermann’s remarks, it’s fair to say that protesting an elementary school is silly.  I also don’t think it was a great idea to publish the school’s details.  If it were my kids’ school, I’d be furious about it

I don’t see what’s productive about blaming Malkin for hate mail, though.  As she points out on her blog today, she gets some pretty disgusting love letters that I’m sure Keith isn’t anxious to take credit for.

Beyond the judgment call that this is a news story, there’s also nothing wrong with Malkin sending an email to Shariz Carney Nunez to try and get her side of the story.  That’s more than a lot of commentators do.

We asked Michelle if she had anything else to say on this subject.  Shockingly, she did.

In the interest of Edward R. Murrow-ian accuracy and fairness, of which MSNBC’s Serious Journalist is a nightly practictioner, I prefer gloss to lipstick. Which would make me a  “big mashed up bag of meat with lipgloss,” thank you very much.

What next in the annals of the MSNBC’s Serious Journalist’ freak-show misogyny? A special comment on which conservative women deserve hate-rape? Oh, wait. That’s been done already…

I predict an even harsher “correction” from Keith.