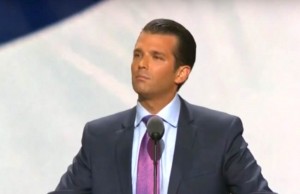 Ivanka Trump has been brandishing her father’s new paid maternity leave platform all over the media for a few days now. By all accounts, she’s been loudly and proudly praising new mothers and declaring that the time to give them paid leave is upon us.

Here’s what Trump Jr. has to say about new moms:

Ever notice that if u get a herd of mothers together they arent physically capable of talking about anything but birth pregnancy & diapers?

The tweet has gotten increasing attention since yesterday, when people began responding to it again.

@DonaldJTrumpJr My wife the software engineer and her collagues respectfully beg to disagree with your assertion.

@bcmystery @DonaldJTrumpJr That is being too nice to him. Most broken human beings are far better people than these Trump klan will ever be!

@DonaldJTrumpJr @Humanitarian66 I think you may just be worse than your father. I didn’t think it possible.

@jaydeflix @Popehat @DonaldJTrumpJr <head whipping back and forth> uhhhhhh wtf

@DonaldJTrumpJr BTW that “HERD” birthed your sorry excuse for a human. Do me a favor ???? #Trump2016 @andylassner pic.twitter.com/zEBKvQ3SEr

Ivanka Trump cut short an interview two nights ago after being reminded that her father, who is the Republican nominee for the presidency, once called working women being pregnant an inconvenience. No one has yet asked about her brother’s tweet.