One And Done: Is Obama Thinking About Pulling A Sarah Palin? 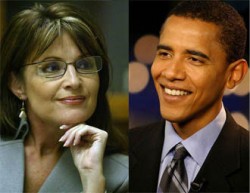 With the midterms fast approaching and President Obama‘s poll numbers plummeting speculation has inevitably mounted as to what Obama will have to do to turn things around before the 2012 election. Here’s a new angle: what if Obama doesn’t want to run for reelection in 2012?

This is the hypothesis anyway of Toby Harnden of the UK paper the Telegraph, who ponders whether all the unpopular decisions the president has made of late aren’t just signs that Obama wants to be a one-term president.

Almost everything Obama does these days suggests that he doesn’t care much about being re-elected. Strange as it might seem, perhaps he wants to be a one-term president…His presidential bid had been based on the power of his life story and his ability with the spoken word. Doubtless he was as surprised as anyone else that he pulled it off. Governing has been altogether more difficult for him and there are signs he is already tiring of it…Obama does not suffer for self doubt. He has long seemed so convinced of his own virtue that to question his motives is illogical. Increasingly, his pronouncements carry the tone of one who believes those who disagree are stupid or bigoted.

In the end, Harnden concludes it’s utterly unlikely that Obama won’t run for reelection — though if he did pull a Lyndon Johnson, it’s not like the Dems don’t have a strong bench: no one doubts Hillary would be more than willing to step in. But it’s an interesting hypothesis in so far as it shows the frustrating limits of the presidency in this uber-partisan age.

And really, it must be difficult some days not to wonder why he is putting up with the down and dirtiness and stagnation of politics (which MoDo says he is “too lofty to pay heed to”) when, as Sarah Palin has so ably demonstrated, you can merely resign (or in Obama’s case, not run for reelection), launch a Twitter account and a Facebook page, and proceed to control the national political dialogue remotely from the safe confines of your comfortable living room with nary a press briefing to answer to. Suffice to say, Obama proved rather talented in 2008 at the sort of slogans that would fit easily into a 140 characters or less, and a charismatic personality will only get you so far…in Washington anyway.