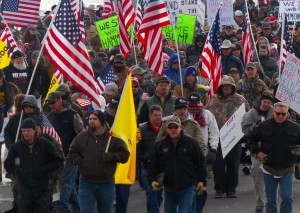 When news broke late on Saturday, January 2, that a self-proclaimed “militia” had overtaken a wildlife refuge in Oregon, some major outlets, like ABC News and the AP, came under fire for reporting on the incident using the words “peaceful protest.” Today, January 4, the militia members issued a video to their social media accounts to encourage further occupancy in a way that will “prevent bloodshed,” so it’s looking less and less peaceful by the minute.

Hey @ABC I fixed that typo for you #OregonStandoff #OregonUnderAttack pic.twitter.com/9gcTDUCVjh

The taking of the refuge – which is federal, not public, property, indicating this takeover was premeditated and detailed – came after what was a peaceful protest against the imprisonment of an eastern Oregon ranching family accused of arson.

The militia (read: mob) is reported to be comprised of 20 to 25 members. Two of them, Blaine Cooper and Jon Ritzheimer, released the borderline desperate-sounding video today calling for more community support.

“We’re in my truck right now, we’re parked right outside the refuge here,” said Ritzheimer before noting that “the place is swarmed with media” but still accessible to the public. “We need you to get here and stand with us; that’s what we need more than anything. That’s what’s going to prevent any bloodshed. [W]hether you’re armed or unarmed, you get up here.”

Details around the situation remain murky as law enforcement agents have made no public statements indicating any intention to halt the siege and news outlets continue to link the takeover to “peaceful protest.” The narrative is further complicated by Ritzheimer and Cooper encouraging the public to “come and visit this historical site” mere seconds before insisting they “don’t want bloodshed.”

Is this a peaceful protest or armed takeover? Is this a potential site of death and destruction or a family vacation destination? The militia and the media seem equally confused.

Video via The Oregonian.