Painter Who Did $20,000 6-Foot Trump Painting Says They Sell For Ten Times That
Opinion

Painter Who Did $20,000 6-Foot Trump Painting Says They Sell For Ten Times That 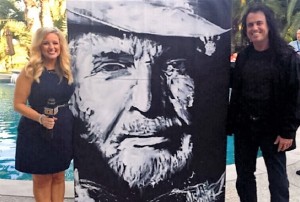 On Tuesday, President Obama ripped into Republican presidential nominee Donald Trump with gusto, including a riff comparing Hillary Clinton’s charity work with Trump’s purchase of a 6-foot painting of himself with $20,000.00 of his Trump Foundation donors’ money. Well, the artist who painted that masterpiece, speed-painter Michael Israel, is speaking out about the painting, the controversy, and the charity he was trying to raise money for.

According to The Washington Post‘s David Fahrenthold, who has been investigating Trump’s claim to have given tens of millions to charity, the painting was purchased at a charity auction in 2007 by Melania Trump for $20,000.00. Israel backs up Fahrenthold’s account, including the fact that the auctioneer had to pressure Mrs. Trump into upping her bid. From Israel’s blog:

Bidding started well. Then Melania bid $10,000…. and the rest of the room stopped!

The auctioneer was quick-witted and gutsy, and I don’t remember exactly what he said, but it was something like…

“Mrs. Trump, thank you for your bid, but everyone else has stopped bidding! No one will bid against you, so I think it is only fair that you double your bid.”

Israel defends Trump on his blog, and expresses disappointment that more attention isn’t being paid to HomeSafe, the highly-rated children’s charity for which he made the painting. However, in a Q&A posted on the blog, Israel reveals that a painting like this goes for $150,000.00 in his studio, and more than ten times what Melania Trump paid at some auctions:

A: No, but it’s not bad for some charity events. I dedicate a number of works to a number of charities each year, then it’s pretty much anything goes for the charity. Today, my studio price for a first-time work on a canvas like the Trump portrait is $150,000.00, it was lower at the time of the event. Works have sold for $250,000, they have also sold at charity events for a lot less. People know they can “steal” an artwork at a charity event and do good for the charity so, collectors often wait for such an event rather than buying directly from my studio. That will change when I retire from touring and stop doing so many charity events.

Israel also says he doesn’t have any pictures of the painting, and doesn’t know where it is now.