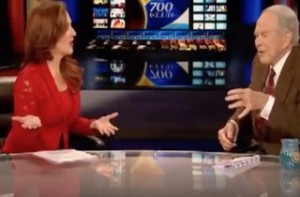 Televangelist Pat Robertson is known for controversial opinions. In the last few months, he’s racked up a few, but he’s been doing it for years. Today, he was at it again in a big way.

On The 700 Club, Robertson responded to the recent national conversation regarding women’s place in the military. His opinion doesn’t really matter since Defense Secretary Ash Carter announced a few months ago that women could enter combat roles, but the real debate has centered on drafting women. Military leaders are into it; political conservative leaders are not.

Robertson falls into that second category. He’s so far behind the news that he’s not just protesting drafting women, but protesting them in combat roles altogether. Give the guy a break. He’s 85.

“The feminists have gotten to a point where women are going to be drafted and put into combat units. Why would any woman in her right mind want that?” he asked, totally bemused, before kicking the topic over to his cohost, Wendy Griffith.

When she told him “there are woman warriors,” he laughed and made a few sarcastic replies. Still, she was a little more measured with her response, saying, “I’m not a good candidate, but I think there are some women that feel that call.”

Apparently assuming that women interested in military careers haven’t ever given it any thought, Robertson looked right at the camera and said, “It’s tough.” Depending on a viewer’s interpretation, that could be pretty offensive, but it’s nothing compared to what came next: