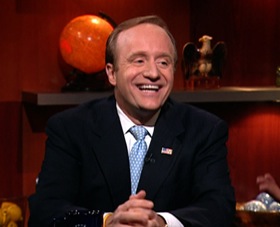 You’d expect James Carville to be the one that would use Karl Rove‘s new memoir as an excuse to remind everyone of a time he won an obscure, near-impossible political campaign, but it’s his lifelong sidekick Paul Begala who is doing the honors this time around. Begala published his very best attempt at a fair review of Courage and Consequence at The Daily Beast today and, unsurprisingly, it’s a little biased.

For its partisan honesty, Begala’s review is wonderfully entertaining and its biting criticism mostly makes the reader want to grab a copy of Rove’s book more. After all, why wouldn’t you want to read a book that has passages that requires that you to “listen to Donny Osmond sing ‘Puppy Love,'” or has passages that sound like “something out of Tiger Beat”? And it’s not like Begala doesn’t warn you that what you’re about to read isn’t exactly the review on the back cover: he begins the article warming reminiscing about the time he ran a campaign that defeated Rove and Fox News pal Roger Ailes. “My candidate kicked his candidate’s ass,” he writes giddily.

To be fair, Begala gives credit where credit is due: he argues the book is candid and personal and exposes a side of Rove that would have made him much more likeable in the past if he had exposed it sooner. “Your heart aches for him when you read about the breakup of his parents’ marriage, the disorientation he must have felt when an aunt and uncle casually told him he was adopted,” he writes. But it doesn’t take long for his sympathy to go from sincere to ironic, later painting a picture of Rove as a sort of Dwight character to George W. Bush‘s Michael Scott, noting that for all his praise, all Rove gets is the nickname “Turd Blossom” and loads of bad press. That’s the kindest part of Begala’s review.

“You’re going to need a full bottle of Tylenol,” Begala writes, “or Jack Daniels—to kill the pain of all the times you slap your head as you read Rove’s memoir,” he says. Then he proceeds to list a series of what he calls doubtless facts (in reality, dubious claims) that Rove omitted from the book. In another colorful metaphor, Begala promises “you’ll go crazy playing Whack-a-Mole with all Rove’s lies.” He notes that the usual suspects over at Media Matters are having a field day.

Perhaps the strangest bit of this review is that Begala was surprised and dismayed that he didn’t find anecdotes that would make Rove look weak. Begala expresses actual shock that Rove does not let his readers into his conversations with Scott McClellan, who turned on the Bush administration after being its press secretary, or with fellow former disgruntled employee Matthew Dowd. It appears there was a genuine expectation that those details would be revealed. It’s a common mistake among liberals, and for exposing it Begala’s review is invaluable, to think that, since all souls fit their definition of “good,” all conservatives will one day feel sickened by the beliefs they currently hold (Begala uses Lee Atwater as an example of this). When they are confronted with legitimate, staunch opposition, their confusion derails them, and this certainly seems to be the case with Begala’s assessment of Rove’s memoir.