Paul Krugman And Tom Friedman Are Fed Up: ‘Obama Has Had No Vision’
video

Paul Krugman And Tom Friedman Are Fed Up: ‘Obama Has Had No Vision’ 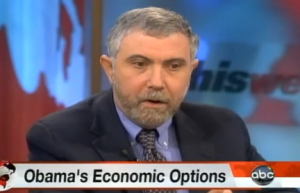 Is this going to result in further calls for drug tests from Robert Gibbs? I think it’s safe to say when one speaks of the “professional left” Paul Krugman and Tom Friedman are at the top of many people’s list. And if this morning’s This Week panel was anything to go by they are very, very angry.

As angry and prolific and hyperbolic as the Tea Party has been this past year, and as much as the White House has been running scared from Glenn Beck in recent months, I’m not sure there’s anything scarier than an hardcore Liberal turned angry. First up, Paul Krugman, who has been critical of President Obama before but perhaps not in such stark terms: This morning he accused Obama of having no vision.

But what is true on all of this is that Obama has had no vision. He has not articulated a philosophy. What is Obama’s philosophy of government? He wobbles between sounding kind of like a liberal. Then he says, well, the conservatives have some points, too. He concedes the message.

There’s never been anything like what Reagan did, which was to say, “We’ve been on the wrong track. We’re going to follow a very different track. That’s going to change things. You need to, you know, support us in this.”

Look, I’m for more health care. I’m glad we’ve extended it to more Americans. But the fact is, there is a real, I think, argument for the case that Obama completely over-read his mandate when he came in.

He was elected to get rid of one man’s job, George Bush, and get the rest of us jobs. I think that was the poor thing. And by starting with health care and not making his first year the year of innovation, expanding economy and expanding jobs, you know, I think, looking back, that was a political mistake.

I think it is fair. You know, one of the criticisms certainly I’ve had — and many others have had — this is not, I think, original — there’s been no narrative to this administration. To me, I think Barack Obama was elected for one thing, which I’m not sure he ever fully understood, to do nation-building at home, to do nation-building in America…There’s never been a unifying message. I’ve worked here since 1989. I personally — just as a reporter, a columnist in Washington — have never seen a worse communicating administration, just at the basic, technical level of, “Hey, we’ve got a good plan. You know, maybe someone out there would be interested in writing about it,” not since I’ve been to Washington.

Unlike much of the hollering on the right these past few months, this is not the sort of criticism that the Obama administration can easily brush away with accusations of election rhetoric. Whether or not he takes it seriously remains to be seen. But it is rather mind-boggling to hear two stalwarts of the left (per some commenters, agreed Friedman less so than Krugman, but still striking to hear him criticize Obama in such stark terms) accuse a president who swept into office on a wave of national euphoria of being both a bad communicator and someone who lacks vision. Apparently we were not the ones we’ve been waiting for? Watch below.