Paul Ryan Channels ’08 Obama: ‘I’m Happy To Be Clinging To My Guns And My Religion’

Paul Ryan Channels ’08 Obama: ‘I’m Happy To Be Clinging To My Guns And My Religion’ 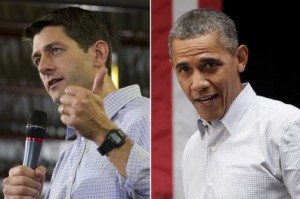 On the campaign trail in Pennsylvania on Tuesday, Republican vice presidential nominee Paul Ryan brought up an old controversy that haunted President Barack Obama the last time he was campaigning in 2008.

“Remember this other time when he said people want to cling to their guns and religion?” Ryan said to the crowd gathered at a steel plant. “Hey, I’m a Catholic deer hunter, I’m happy to be clinging to my guns and religion.”

Ryan was referring to the then-candidate Obama’s remark at a fundraiser. Speaking about frustrated voters, he said, “It’s not surprising then that they get bitter, they cling to guns or religion or antipathy to people who aren’t like them or anti-immigrant sentiment or anti-trade sentiment as a way to explain their frustrations.”

Ryan also invoked Samuel “Joe the Plumber” Wurzelbacher, asking the audience, “Remember the guy ‘Joe the Plumber?’ Remember when [Obama] said he wanted to spread the wealth around?”

Criticizing what he perceived to be Obama’s economic philosophy, Ryan went on (via CBS News):
“It’s this belief that the economy is some fixed pie, that there’s only just so much money in America, it’s fixed, and that the job of the government is to redistribute the slices of the pie,” Ryan said of Obama’s philosophy. “That’s not true. The job of the government is to set the conditions for economic growth so we can grow the pie and everybody can get a bigger slice of the American pie through economic growth, through opportunity, through achievement, upward mobility. That’s where prosperity comes from.”