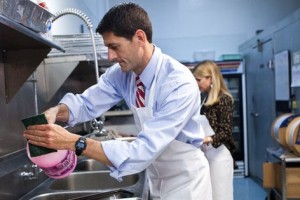 Following a campaign event at Ohio’s Youngstown State University on Saturday, Republican vice-presidential candidate Rep. Paul Ryan (R-WI) made a stop at a Youngstown soup kitchen to do his part for local teat-sucklers and personally irresponsible victims. While local media outlets shot the stop in the intended soft glow, some rogue pool reporters let slip that Ryan’s actual contribution to the charitable folks at the St Vincent De Paul Society Dining Hall was to waste some of their soap and water washing dishes that were already clean.

According to WKBN, “Ryan then met with some of the people who eat at the soup kitchen, as well as volunteers,” and noted that “the facility serves close to 100-thousand people each year.”

But print accounts of Ryan’s visit to the Poorsville section of Youngstown tell a different story. Ryan and company showed up after the local layabouts had already been fed, and the kitchen had already been cleaned up:

Ryan, his wife and their young children headed to the kitchen, donned white aprons and offered to clean up some dishes.

Ryan stood at the sink and took some large metal pans that did not appear to be dirty, soaped them up and rinsed them, remarking as the cameras clicked and the TV cameras rolled that he had spent a summer washing dishes when he was younger.

“We had a Hobart, though, which was — you get calluses on your fingers because it’s so hot,” he said, referring to the Hobart industrial dishwashing machine.

A few minutes into the dishwashing, reporters were escorted out of the building and onto a press bus.

The Huffington Post has a great collection/deconstruction of photos from the stop, which includes a high resolution shot that allows you to zoom in on dishes in Ryan’s “wash” pile that gleam brightly enough to burn your retinae, and to see the worn prop scrubbers that were strategically placed on them: 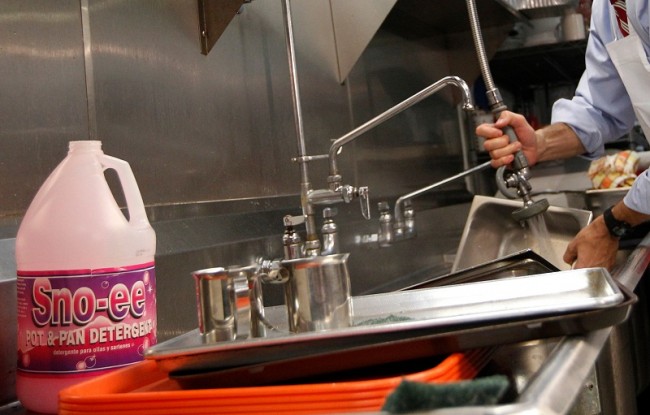 Hey, you gotta give Ryan props. I mean that literally, you have to give him actual props, like dishes, soap, grody scrubbing pads… and homeless-looking people. The Washington Post‘s Felicia Sonmez goes on to report that after washing the clean off of those dishes, Ryan met with some of the takers who eat there:

As Ryan exited the building some minutes later, a small group of people, some of whom appeared to be homeless, seemed to engage Ryan, and the candidate stopped for several moments and spoke with them.

The campaign escorted photographers from the bus for Ryan’s exchange, but reporters were not allowed to do so. …A campaign aide said that the exchange was not open to press because it was an impromptu conversation.

See, it was a Zen-themed campaign stop. Having already answered the riddle “What is the sound of clean dishes being cleaned,” Ryan metaphorically asked “If you take pictures of an impromptu conversation, but no one’s there to hear it, does it make a sound?”

Since there were no reporters present, we can’t confirm that Ryan apologized to them for letting President Obama close the soup kitchen, or said “We Low-Body-Fat Americans gotta stick together, am I right?”

Photo-op artifice is the currency of the political realm, so there are, doubtless, many examples of this sort of thing from all kinds of politicians, but this resonates because it fits with the Ryan/Romney inability to do anything honestly, even washing some dishes. It also demonstrates the degree to which our news media play along with these charades.