Petition for Tomi Lahren to Be Removed From The Blaze Hits Its 15,000 Signature Goal 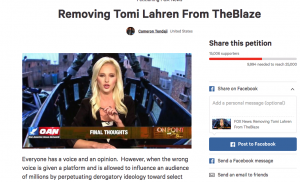 Tomi Lahren is a young white news anchor for Glenn Beck‘s The Blaze whose work only goes viral and receives coverage when she goes on a racially-tinged tirade. As a result, she’s gone on quite a few and, of course, trended pretty often. What she says — and allows others to say on her show —  is often incendiary and shocking.

Last night, as news was breaking that police officers had been shot in Dallas, Lahren went on a Twitter tear that likened Black Lives Matter to the Ku Klux Klan. As we now know, BLM had nothing to do with the shooting suspect, who claimed he acted alone.

Speaking of individuals having nothing to do with larger organizations, people on the Internet are banding together to request that networks completely disengage with Lahren going forward.

A change.org petition called “Removing Tomi Lahren From TheBlaze” has already met its goal of 15,000 signers and has now moved the goal to 25,000.

The text that accompanies it is long, but here are some key phrases:

Everyone has a voice and an opinion. However, when the wrong voice is given a platform and is allowed to influence an audience of millions by perpetuating derogatory ideology toward select groups of individuals, this is where the injustice lies. Tomi Lahren (although her words are laden with passion and emotion) lacks the knowledge and experience to effectively communicate and facilitate … Should a biased, misinformed, 23-year-old with no background in law, law degree, life experience, or experience in Government be the political voice of a generation that will change this nation?

The petition is addressed to Fox News and will also be delivered to Viacom, ABC, NBC, and CBS. The Blaze is Beck’s and does not belong to any major networks, but local stations can become affiliates, so that could explain why the petition is going out to the major networks and not Beck himself.

Lahren and Beck have yet to respond to the petition.