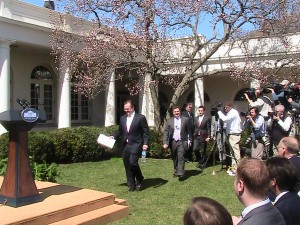 As an appetizer for this weekend’s White House Correspondents Association (WHCA) dinner, Politico serves up a sprawling buffet of  White House versus the press coverage, consisting mostly of leftovers. It’s hard to fault them, since I was about to do the exact same thing, but this gives me a great excuse to get a few things off my chest.

I’ve already covered much of what’s in Politico’s story, but there are a few points that I was too busy to write about at the time, so I appreciate this opportunity.

First, there’s the issue of the WHCA’s recent crusade for a freer press. They met with Robert Gibbs awhile back, and went over a raft of issues that were “causing tension” between the press and the White House. Reports of that meeting, however, showed that all of their complaints related to access for their press pool. In fact, one such complaint related to kicking Richard Wolffe out of an event. From the Politico story: (originally reported by Michael Calderone at Yahoo)

The Washington Examiner’s Julie Mason confronted former Newsweek correspondent Richard Wolffe, author of a highly favorable book about the Obama campaign, when he attempted to join the White House pool on the Saturday before Congress’ big health care vote.

“Are you working for them officially now?” shot back Mason.

That’s a pretty low blow. I asked Wolffe what he thought of Mason’s remark, and he said “Traveling in a pool van to an event on TV hardly qualifies as anti-free press. Mag photogs have done it for years.”

There are a lot of freelancers and other White House reporters who aren’t in the press pool, and if the WHCA was truly interested in a freer press, they’d be fighting to get them into more events, not to kick Wolffe out.

I asked several sources who were at that meeting if any non-pool related issues were raised, and a WHCA source told me that the only other issue that was raised was that “we would like to see more news conferences.”

Nothing at all about expanding the (currently minuscule) number of “open press” events, or improving our access to participants at those events. This was about maintaining a privileged status quo, nothing more. There’s nothing wrong with that, I suppose, but to cast this as a crusade for a freer press? No sale.

As Wolffe also pointed out this morning, Politico isn’t really in a position to complain about the White House playing favorites with journalists. Dating back to the 2008 campaign, if I had a nickel for every time I tipped Obama’s press office to a story, only to have them feed a statement to Politico an hour later, I could afford to get into a Palin fundraiser.

It was the same process every time. I would call the Obama press office first thing in the morning (after awhile, I started checking to see if I was the first reporter to ask), they’d promise to get a statement and call me back, and they would email the statement to Politico about an hour later.

In fact, one of the few times I managed to scoop Politico (and fed it directly to Ben Smith), they didn’t even credit me by name.

Now, I suppose the White House can hardly be blamed for feeding exclusives to outlets with the most effective reach, and I do very well for a freelancer, access-wise, but I sure as hell don’t want to hear it from Politico when it comes to special treatment.

There’s also the issue of reporters fearing “retribution” from the press office. This was the excuse given by the Washington Post for relying so heavily on anonymous quotes in their Gibbs profile. I don’t buy that for a second. If I could tell where most of those quotes came from, I’m sure Gibbs could, too.

Politico takes it a bit further, accusing the White House of  freezing out reporters who are even mildly critical of the administration. My experience, though, tells a different story.

This is something I’ve always been acutely aware of, as it would be very easy to freeze me out. Last spring, with only a handful of briefings under my belt, I grilled Gibbs repeatedly and uncomfortably about “Don’t ask, don’t tell,” and that chilly possibility was never far from my mind.

Last summer, I also had a protracted, very contentious back-and-forth with the White House over the PhRMA deal, so contentious that the Senate Finance Committee ordered their staff to lie to me rather than answer my questions. I worried a lot that I’d never get another question in at a briefing, or another response to an email.

The retribution never materialized. In fact, my access has actually improved a little since then, even after I revisited the topic just last month.

That’s not to say that no reporter is ever frozen out, but it cuts against the idea that it relates simply to criticism of the administration. Gibbs points out that the White House’s aggressive pushback has more to do with correcting the record before the paint dries, a very short window these days:

Gibbs said the White House’s efforts to push back tend to focus on fixing factual mistakes before they take hold in the media.

“The way we live these days, something that’s wrong can whip around and become part of the conventional wisdom in only a matter of moments and it’s hard to take it, put a top on it and put in back into the box,” Gibbs said. “That’s the nature by which the business operates right now.…This isn’t unique in terms of us and it’s likely to be more true for the next administration.”

To be sure, there are valid criticisms to be made. Presidential news conferences, when they happen, are little more than formal, public versions of exchanges that major outlets already have with the President, who has given a record number of interviews. Far more useful to democracy would be a setup where the President shows up to a random briefing once a month, and takes questions the same way Gibbs does.

Bill signings, and other White House events that are currently open to all press, could as easily be covered by watching C-Span. The press are partitioned off as spectators (often with terrible seats), and ushered out once the message is delivered. Letting us interview participants, or even audience members, would be a simple, but welcome, improvement.

The freer the press, the better, but let’s free all of us, ok?