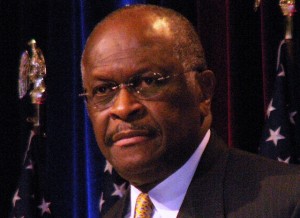 Late Sunday evening, Politico published a report alleging that current Republican presidential frontrunner Herman Cain was the subject of accusations of sexual harassment while he was head of the National Restaurant Association (The Other NRA™).  While Politico’s story is thoroughly reported, it relies completely on anonymous sources, which might make this budding scandal survivable if not for the candidate’s, and his campaign’s, prosciutto-fisted handling of it.

According to the report, Cain was accused by two women, employees of the NRA, of repeated inappropriate behavior, including “unwanted sexual advances,” but both women were paid off to leave the association, and to keep quiet. While the sourcing for this reporting is all anonymous, most of the sources bear strong attribution (e.g. “a former board member” versus “a source familiar with…”), and Politico has the names of both women involved, but has withheld them out of respect for their privacy. They also report having seen documentation relating to one of the cases. Journalistically speaking, it’s rock-solid reporting.

From a PR standpoint, though, the Cain campaign could have finessed their way out of this with relative ease, especially given his party’s suspicion of anything that smacks of “political correctness.” After all, even if you grant that the allegations were made, and settlements were reached, it wouldn’t have been difficult for a prepared Cain campaign to cast this as disgruntled, over-sensitive employees making a grab at the NRA’s deep pockets. The fact that Politico’s report contains multiple named sources defending Cain would certainly have been of help there.

Instead, though, Politico describes a series of weak evasions by the campaign (“Cain spokesman J.D. Gordon told POLITICO the candidate indicated to campaign officials that he was ‘vaguely familiar’ with the charge”), culminating in a confrontation with reporters, by Cain, that had all the grace of Disney’s Gingrich On Ice:

Cain said he has “had thousands of people working for me” at different businesses over the years and could not comment “until I see some facts or some concrete evidence.” His campaign staff was given the name of one woman who complained last week, and it was repeated to Cain on Sunday. He responded, “I am not going to comment on that.”

He was then asked, “Have you ever been accused, sir, in your life of harassment by a woman?”

He breathed audibly, glared at the reporter and stayed silent for several seconds. After the question was repeated three times, he responded by asking the reporter, “Have you ever been accused of sexual harassment?”

The timing here couldn’t be worse for Cain, as this story will be all over the place Monday morning. Anyone who has Herman Cain booked for an appearance tomorrow (PBS’ Newshour, for one) ought to line up an alternate guest now. Cain’s standing in the polls has withstood a series of mishaps, but this one could be the one that ends his run at the top of the GOP polls.

What’s also remarkable about Politico’s story is that they held it as long as they have. The Cain campaign has known about the story for ten days, which should have been long enough for them to prepare, but is also a perilously long time to risk getting scooped. In fact, if the Cain campaign had its act together a little bit, they could have scooped Politico themselves, and gotten out ahead of it with their own version of events.

Cain’s ascent to the top of the polls, and his staying power, have been mystifying in their immunity to all logic and reason, so it would be premature to declare his candidacy dead based on this report. However, if they don’t think of a better response than they’ve given so far, the prognosis isn’t good.

Update: Politico now reports a non-denial statement from the Cain campaign (that echoes much of what they told Politico before they published) and a terse denial to the Associated Press: