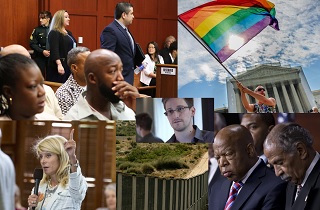 The past several months have been a news-rich environment that has carried into the normally-slow summer news cycle, and The Pew Research Center’s latest news interest survey indicates that black people are significantly more engaged about a range of news stories than white people. While you might expect such a result with stories like the George Zimmerman murder trial and embattled celebrity Chef Paula Deen‘s difficulties, the survey also found a disappointing disparity in interest on the Supreme Court’s gutting of the Voting Rights Act, and higher interest among black people even in the saga of NSA leaker Edward Snowden. In fact, black people showed more interest than whites in every story in the survey, with the exception of the Supreme Court’s marriage equality rulings, where interest was equal.

Here are the news stories that white people were following closely last week, in order of strongest to weakest interest:

And here are the news stories that black people were following closely last week, in order of strongest to weakest interest:

As you can see, the disparity in interest is greatest with regard to the George Zimmerman trial for the killing of Trayvon Martin, and with the Supreme Court’s gutting of the Voting Rights Act of 1965. While both disparities are disappointing, neither is all that surprising.

What is a little bit of a surprise is that black news consumers were also more engaged than whites on immigration, Wendy Davis‘ filibuster of an unconstitutional abortion ban, and even the saga of NSA leaker Edward Snowden. The reason this is surprising is that Pew doesn’t normally break out its news interest crosstabs by race, unless there’s a black-skewing story, or three, in the news. It would be interesting to see how that broke down during a more typical news cycle.

If they did, news organizations would probably find a huge untapped audience, as evidenced by the three cable networks’ 2012 growth in their black audiences. MSNBC grew their black audience by 60% in 2012, while CNN also gained a slightly less-whopping, but still whopping, 23.7%. Those two net gained an average of 138,000 black viewers in prime time, while Fox News lost 9,000, which means cable news created 129,000 black news consumers in 2012. This Pew survey seems to indicate that not only is the black news audience underserved, it is apparently more engaged than the white audience.