Poll: Country Views Dems Negatively, But GOP Is ‘Even Worse’

Poll: Country Views Dems Negatively, But GOP Is ‘Even Worse’ 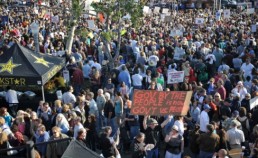 If Tuesday’s election results weren’t enough evidence for you a new poll has been released that suggests the country is pretty much out of patience with politicians…be they of the Democratic of Republican variety. The NYT and CBS just released a joint poll which finds that “while voters rate the performance of Democrats negatively, they view Republicans as even worse, providing a potential opening for Democrats to make a last-ditch case for keeping their hold on power.”

So basically everyone is angry at and distrustful of everyone — a conclusion which is daily supported on most cable channels. No wonder Sarah Palin is doing so well. Or not. The poll also says that “the public has an increasingly negative opinion of Sarah Palin, the former Alaska governor and 2008 Republican vice-presidential nominee, with nearly half now holding an unfavorable view of her. Her favorable rating is down nine percentage points since April.”

I think the lesson here is this. No one really knows what’s going to happen on election day. The country appears to be either in mid-tantrum or mid-desperation or mid teaching Washington a lesson, and subsequently is threatening to put people in office who are clearly not qualified for the job. Whether or not the public-at-large acts on that threat come November is anyone’s guess.

It should probably be noted, amidst all this anger, that voter turnout remains low. GOP primary turnout numbers are higher than Dems for the first time since the 1930’s, however, in the larger picture very few people are voting, meaning among other things, the results thus far are fairly representative of the fringe more than anything.