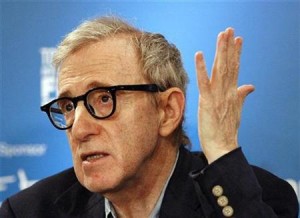 As the summer progressed and America debated over whether or not we should have an Islamic rec center near Ground Zero, basically turning our country into the plot of Breakin’ 2: Electric Boogaloo with Muslims instead of break dancers, one question remained: when will the director of The Purple Rose of Cairo give us his opinion? Well, worry not, fans of film and religious controversies, because the New York Daily News has gotten the answer! So lets find out what Woody Allen has to say because, really, why is his opinion any less relevant than Sarah Palin’s?

So, does the man who brought us Manhattan think there should be a mosque in…Manhattan? Drum roll, please!

“‘Of course I think they should build the mosque,’ Allen, 74, told us at the Cinema Society and BlackBerry Torch-sponsored event. He added that ‘the only people that have a right to weigh in on’ the divisive issue ‘are the people that were personally involved in 9/11.’

‘The people who lost friends or relatives have every right to protest and say what they want to say,’ Allen tells us. ‘All of the other people weighing in’ are doing so for ‘political’ and for ‘exploitation reasons.’ he continued. ‘I feel those people should shut up and just let the people who were personally affected make their case.’

Not that he necessarily agrees with them. ‘If I was speaking to the people who are protesting legitimately, I would try to convince them, if I could, that building the mosque takes a step toward eliminating this kind of thing from happening again,’ Allen said. ‘Preventing the mosque from being built is not a step in the right direction.'”

Oh, man, did you hear that? The new Blackberry Torch is out! Whoo! Oh, and Woody Allen doesn’t mind the mosque. How about that?

So, if you’ll excuse me, I have to complete my media duty and continue this story at all costs by finding every single famous New Yorker ever’s opinion on it. Now, does anyone know how I can reach David Berkowitz in prison?