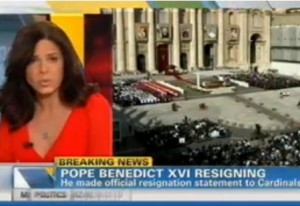 While MSNBC’s Morning Joe was busy lauding Pope Benedict XVI as a crusader against child sexual assault Monday morning, Breitbart.com editor John Nolte was blasting CNN’s Piers Morgan and Soledad O’Brien for “trashing” the Pope and the Catholic Church. Intrigued, I immediately checked Morgan’s Twitter feed, and pulled the clip from O’Brien’s Starting Point, only to find that by “trashing,” Nolte meant “making only the most general of factual statements,” as even “left-wing” filmmaker and Starting Point guest Alex Gibney took it way easy on the artist formerly known as Joseph Ratzinger.

After the sickening spectacle on Morning Joe, I was ready for some brave soul to actually take Pope Benedict to task over his long history of enabling priests to sexually assault children, so when Nolte’s link hit my Tweetdeck, I was intrigued, even more so when I saw that he was actually so offended by CNN that he felt compelled to compliment MSNBC. From Breitbart.com

While MSNBC kept its coverage respectful, CNN showed no such restraint, and immediately used the news as an excuse to launch into a frenzy of Catholic-bashing.

That “Catholic-bashing” consisted, in part, of Piers Morgan’s astute observation that, like MC Hammer, most Popes are 2 Legit 2 Quit:

As a Catholic, I’m not buying this. Popes don’t just quit because they’re tired. What’s going on here??

The Queen’s a year older than The Pope. Can’t see her ever resigning because she’s tired. #indefatigability1infallibility0

Before Benedict, the last pope to end his run before dying was Pope Gregory XII, who, in 1415, abdicated in order to settle a sort of Papal Cola War, and the last one to resign was Celestine V, in 1294, after only a five-month papacy. At 85, Benedict is old, even for a pope, but there’s nothing remarkable about Morgan’s tweets.

Then, Starting Point‘s Soledad O’Brien, a Catholic herself, had the nerve to interview “left-wing” filmmaker Alex Gibney, whose “Mea Maxima Culpa: Silence in the House of God” deals with a case of decades-long sexual abuse of deaf children, and will premier on HBO later this year. Although Benedict, as Cardinal Ratzinger, was personally involved in that case, Gibney doesn’t bring it up, or any of Benedict’s pre-Papal history. He essentially makes the same observations that MSNBC’s expert did, only without posing the departing Pope as some kind of heroic crusader. “I think Pope Benedict’s reign, if you can call it that,” Gibney said, “has been defined by the sex abuse scandal,” and later added that Benedict had “gone hard at” dissenters, “drumming them out” for “questioning things like forced celibacy, or gay marriage, or the role of women.”

O’Brien did ask an excellent question, which Gibney did not know the answer to. “The last pope resigning happened 600 and some odd years ago,” she observed, asking “especially in light of the ongoing investigation into some of the scandals, what happens when a pope resigns?”

As Pope Benedict, for example, Ratzinger is immune to civil and criminal prosecution as a “head of state,” but for former heads of state, the question isn’t so cut-and-dried. While established legal doctrine says that former heads of state retain immunity, which can be waived by their state, a recent Department of Justice brief throws some doubt on that fact:

The Justice Department’s brief on behalf of Kagame provides a somewhat more detailed statement of Executive branch views on the temporal scope of head of state immunity than has customarily been included in suggestions of immunity, noting that a head of state enjoys immunity while in office for actions taken before assuming office and also enjoys residual immunity after leaving office for acts taken in an official capacity while in office (but not for alleged acts predating the individual’s tenure in office.)

That particular corner of the conservative media has a well-known blax to grind against Soledad O’Brien, but there’s also a wing of conservatism that sees the Catholic sexual assault scandal as an opportunity to demonize gay people, rather than the rapists and those who protect them. This is likely a combination of those factors, plus a bonus shot at pro-gun-regulation Piers Morgan.

Like the rest of the media, CNN is taking it very easy on Pope Benedict, but at least they’re asking interesting questions, which, in Breitbart.com parlance, equals “trashing.”