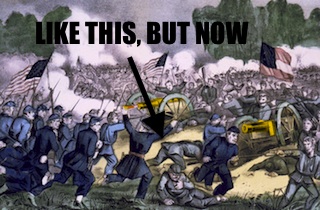 The following is a transcript of a letter obtained by Ken Burns for his forthcoming documentary The Civil War II. It is best read while listening to this.

My Most Beloved Melody,

It has been a long time since your visage has greeted my eyes, and my heart grows weaker with each day that passes without your embrace. As such, it is with great sorrow that I must write to you in warning. I fear that our distance shall only grow longer. For you see, my love, I just visited the Fox News website and there I heard the most horrible thing. There is a civil war coming, Melody. A civil war between the Makers and the Takers.

This news was brought to me in a Fox News Op-ed column by the esteemed Mr. Arthur Herman entitled, as bluntly as all dire proclamations are, “America’s coming civil war — makers vs. takers.”

I read this column with rapt attention, my angel, for it speaks of a terrible truth hiding amongst the news of President Obama’s new tax plan. In my naiveté, I had foolishly thought that Mr. Obama’s plan to extend the Bush era tax cuts for only the middle class would simply mean that taxes would stay the same for every family’s first $250,000, a number that the great majority of us would never dream of meeting. In actuality, it would appear that this tax plan signifies the drum beat of war.

Take a gander at this selection from the column:

“’A house divided against itself cannot stand.’

Those were Abe Lincoln’s words in his first inaugural in 1861, as America was running headlong into civil war. Now we’re a house divided again and another civil war is coming, with the 2012 election as its Gettysburg.

Call it America’s coming civil war between the Makers and the Takers.

On one side are those who create wealth, America’s private sector–the very ones targeted by President Obama’s tax hikes announced Monday.

On the other are the public employee unions; left-leaning intelligentsia who see the growth of government as index of progress; and the millions of Americans now dependent on government through a growing network of government transfer payments, from Medicaid and Social Security to college loans and corporate bailouts and handouts (think GM and Solyndra).”

I feel no shame in saying that I am frightened, my shining light. Not only will this war tear our nation apart and tear me away from the woman I love. It will also, I fear, be a war between brothers. You see, my bubbling brook, my brother is…a Taker. He is a member of a union. I once thought that meant that he would get a fine insurance and be protected from cruel employers. In reality, this means that my blood is also my mortal enemy.

Will I have to kill my brother? I can’t bare to think on such a thing. However, thanks to Mr. Herman, I know that I must.

It is a dark day, Melody. A dark day indeed.

Of course, it is entirely possible that none of this will take place and that the Fox News column is nothing but hyperbolic bullshit. In that case, I’ll see you this weekend. Want to see a movie? We can see the new Spider-Man. I’ve heard mixed things.