Pretty Help Machine: Trent Reznor and “Eric’s Army” Unite On Twitter To Save A Life

Pretty Help Machine: Trent Reznor and “Eric’s Army” Unite On Twitter To Save A Life 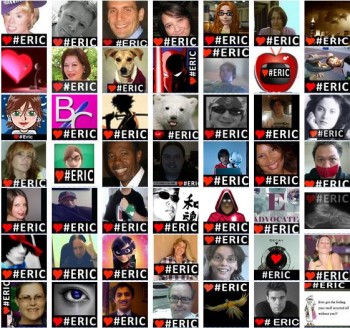 I posted earlier earlier about about my friend Veronica De La Cruz, who has been working social media like crazy to save her brother Eric, who needs a heart transplant but couldn’t get one due to ridiculous inter-state red tape (he’s covered in Nevada but there are no centers who perform the operation; however, the nearest out-of-state facility is ineligible because his Nevada health insurance won’t cover it).

Here’s the update: after big first week of awareness-raising, petition-signing and media coverage the De La Cruz family was able to appeal Medicare’s denial of coverage for Eric, and their appeal was successful. (Not sure if that’s attributable to Harry Reid’s office “looking into” it circa May 18th, but somehow I doubt it). Thanks to federal Medicare, Eric was able to get on the transplant list — but it will cost thousands of dollars to pay for the operation — which he needs to have before he can get treatment.

Enter Twitter. Veronica launched a fundraising campaign to raise money for the (very) expensive operation and Twitter jumped on board, under the hashtag #ERIC and with the distinctive supporter logo shown above (also seen here). It started to catch on. The retweets worked their way up, until Eric’s cause was being retweeted by Al Roker, Demi Moore, P. Diddy, Alyssa Milano, Kathy Ireland, Annie Duke, Kevin Smith, and Twitter celebs like Pete Cashmore and The Expert (for some context: Pete Cashmore has 716,304 followers; Alyssa Milano has 68,268; The Expert has 21,288; Al Roker has 19,307).

Even better, some celeb supporters did more than retweet. Trent Reznor of Nine Inch Nails joined the cause early and upped the ante significantly, putting the fundraising call out on his website and selling off various passes to the upcoming Nine Inch Nails/Jane’s Addiction tour. Per Paste mag:

A $300 donation will grant concert attendees access to the pre-show soundcheck and a meet-and-greet with the band, while $1,000 will get you backstage for dinner and relaxing with the band, as well as stage-side viewing for the show, autographs and pictures. For fans without tickets, a $1,200 donation comes with two tickets to the show and VIP treatment backstage. This is NIN’s final tour, so fans of the band will want to seize this opportunity.

Reznor raised over $260K in the first day — and as of now he has raised over $850K. He announced on his site that he had sold out of all the VIP packages in North America (and that’s a lot of cities!), so is offering something else awesome instead: One hundred collectable, signed skateboards by Tony Hawk (737,211 Twitter followers – and another #ERIC supporter). A $1,000 donation wins the skateboard plus a copy of NIN’s rarest CD release, STILL, signed by Reznor. Here’s a Twitpic of Hawk doing the signing; here’s Reznor’s appeal for a more help:

Please consider helping if you haven’t already — we’re showing the world the power of a strong and committed community, and we’re quite possibly saving a life in the process. We still have a ways to go financially. Thank you all.

There’s retweeting, and then there’s this. Wow.

(On the other hand, I have to say that one of the weird things I’ve noticed during this campaign is a lack of CNN presence. Veronica worked at CNN, came up to New York from Atlanta, was with them until the end of 2008, parted amicably. I’ve kept an eye on her feed and the #ERIC feed Tweetdeck columns, and I have yet to notice a CNN-based retweet; searches within Rick Sanchez and Anderson Cooper for #Eric came up nil. I’m just surprised that there would be so little effort to help a former colleague — never mind that this is a legitimate story.)

So what happens now? I guess they wait — now that they are on the transplant list — and can prove that they have the money — they need an actual donor. Eric is in critical condition and, well, there’s a reason all this is happening with such urgency in the first place. In the meantime, Veronica and her family are doing what they can — with the help of “Eric’s Twitter Army.” From Trent Reznor to Tony Hawk to every celebrity retweeting out to thousands, to each individual person sending a flare up via Twitter — every little bit counts, especially now. I’ll leave the last word to Veronica:

Happy 2 be able 2 lean on my Twitter friends 4 strength, even from Cyberspace. xo