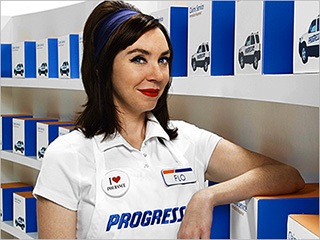 I know Matt Fisher a little bit; a sketch comedy show he did a few years ago remains one of the funniest things I’ve seen, he lives near enough to me that we use the same subways, and we run in a lot of the same circles. Readers of this site may know him too; he’s one of the writers for GBTV’s The B.S. of A. with Brian Sack and recently went on tour with Glenn Beck to promote the show. As such, like me, you might have heard about the horrible ordeal that enveloped he, his family, and Progressive Insurance and has absolutely been blowing up the past few days (Gawker, for instance, now has an entire front page section dedicated to updates).

While I’ve written a bunch about the story on my personal blog and Twitter, I haven’t covered it for Mediaite, partially because I know the guy and mostly because it’s unrelated to politics and media. However, Progressive’s social media response has everything to do with media (the word’s right there in “social media”!) and I will write about that because it is basically a textbook example of a corporation doing every single thing wrong when combatting bad 21st century press.

For those of you who don’t know, this is what went down. Throughout last week, Fisher had been tweeting angrily at Progressive’s official Twitter account. Two days ago, he wrote a long post on Tumblr explaining to his friends and fans what the deal was. He gave it the instantly noticeable title, “My Sister Paid Progressive Insurance to Defend Her Killer In Court.”

In that post, Fisher told of how his sister, Katie, had tragically been killed in a car accident with an underinsured driver. Witnesses claimed that the other driver was at fault and his insurance provider instantly paid out a small sum. However, Katie was a Progressive customer and they refused to give the Fisher family the money her policy promised her. Eventually, they offered to pay a much smaller sum, claiming that it wasn’t proven that Katie wasn’t at fault. The Fisher’s were forced to take legal action. However, due to a Maryland law, they found that it was illegal to sue an insurance company for policy payment. Instead, they had to sue the other driver in civil court to prove that he was at fault.

And here, in my admittedly biased opinion, is where it got disturbing. From Fisher’s Tumblr:

At the trial, the guy who killed my sister was defended by Progressive’s legal team.

If you are insured by Progressive, and they owe you money, they will defend your killer in court in order to not pay you your policy.“

Yikes. The driver was found at fault and now Progressive will have to pay but, still, yikes.

Unsurprisingly, the blog post started getting lots of reblogs from Fisher’s friends. Then, it began to go viral. Then, actor and incredibly popular Internet presence, Wil Wheaton, reblogged it and everything absolutely exploded. Sites like Gawker picked it up and, within a day, the story was being featured everywhere from the Daily Mail to local news broadcasts throughout America.

Clearly, Progressive needed to respond and, since I am admittedly biased about much of this story, I want to focus on that response because, like I said at the top, the company did absolutely everything wrong to a baffling degree.

After Wheaton posted the story, tons of people (including some very well-known comedians) began tweeting at Progressive and writing on the company’s multiple Facebook pages. Progressive wrote a quick response using the site Twit Longer which enables users to post tweets that are longer than 140 characters:

However, someone thought it would be a good idea to copy and paste that link to dozens of different people who responded. The statement was intended to make them seem compassionate but firm. Instead, this rampant pasting (in addition to their image being that of their cheerful mascot, Flo), made them just look like a soul-less, lipsticked robot. People quickly began taking screen shots of their Twitter page and mocking them: 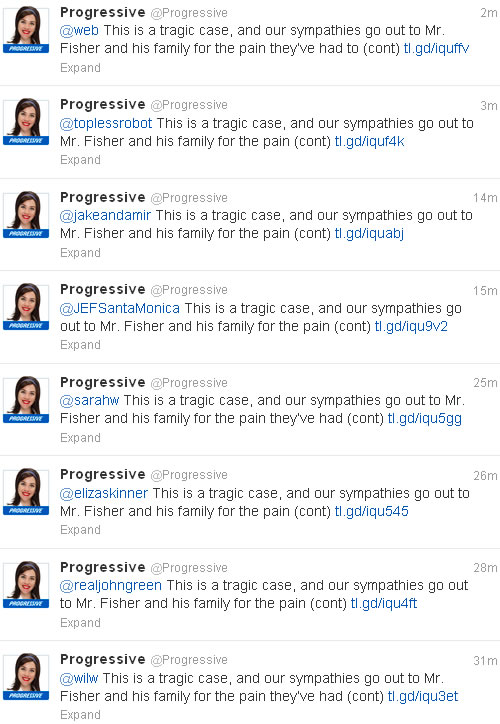 If that didn’t look bad enough, because they copied and pasted the same thing so many times, their official Twit Longer account got disabled (presumably for breaking spamming rules) so all the links in the tweets were now dead. (Since this, Progressive has deleted all the tweets and removed Flo from their image)

Instantly, the news coverage began to cover Progressive’s response as well. They then released a longer statement linked on their Facebook page and Twitter:

“I’d like to take this opportunity to explain Progressive’s role in this complex case. First and foremost, our deepest sympathies go out to Kaitlynn Fisher’s family.

To be very clear, Progressive did not serve as the attorney for the defendant in this case. He was defended by his insurance company, Nationwide.

There was a question as to who was at fault, and a jury decided in the Fisher family’s favor just last week. We respect the verdict and now can continue to work with the Fisher family to reach a resolution.

Basically, Progressive is saying that Matt Fisher’s facts are wrong and that they sent no attorney. He then responded with another blog post, doubling down and giving the name of Progressive attorney he remembers being there.

I guess that’s the end of it, right? It’s now Matt’s word against theirs. Done.

Or, at least, it would be. If this weren’t 2012 and the Fisher family didn’t have the entirety of the Internet on their side. Within an hour of Progressive posting that statement, Internet sleuths went and found the original court records from the trial. And, sure enough… 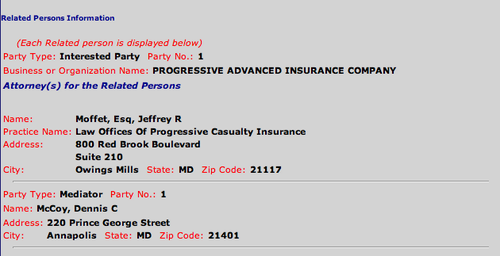 Right there in official state ink, a man identifying himself as representing Progressive appeared in court and acted as an “interested party” on behalf of the defense. So, when Progressive made that big statement claiming that Matt was a liar, they were just playing word games with the definition of “defended.”

And, of course, the Internet wasn’t done sleuthing. Further in the records it stated that the Progressive attorney had been granted an allowance “to intervene as a party Defendant.”

Basically, this all goes to show just how much social media has changed the landscape in the ways corporations are allowed to treat regular people. With one quick keystroke from a former Star Trek cast member, Progressive has become embroiled in a massive scandal. And, sure, they just did what any insurance company would do (because, y’know, they all totally do stuff like this constantly), but it’s clear now that their attempts to keep this from becoming a big story have done the exact opposite. They lost the court case, they were going to have to pay anyway. They could have just said that from the very beginning. Instead, they misused social media platforms and then tried to hide facts through careful phrasing.

The fact of the matter is, in 2012, the Internet will find out the truth. Really, really fast.

Below, a photo of Matt and Kaitlynn Fisher: 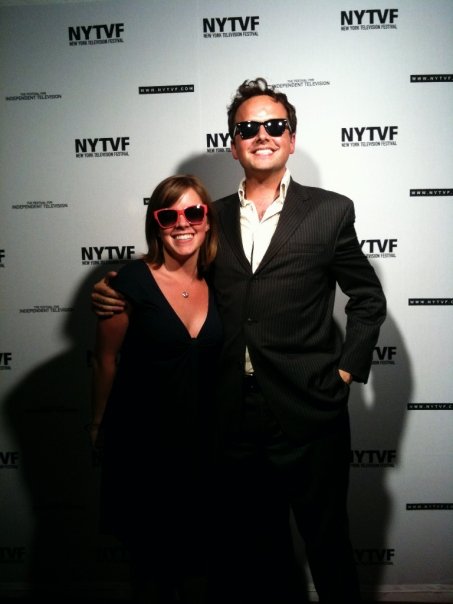