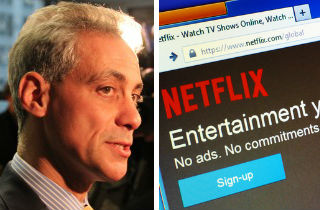 It seems that more of what we do on a daily basis involves streaming data to and from “the cloud,” the mythical technological ether that houses our photos, videos and documents. Chicago Mayor Rahm Emanuel and his city have taken notice, and they want to tax the f*ck out of it for a profit.

As The Verge reports, “it’s a puzzling tax” because it tries to localize (taxes) something that is inherently universal (cloud computing). That is, cloud-based services like Netflix and Spotify will work the same anywhere in the world, so long as the user has a decent Wi-Fi connection. Taxes, however, are usually anchored down to a specific place — countries, states, cities, counties. So how the hell is this going to work?

Chicago’s new tax is actually composed of two recent rulings made by the city’s Department of Finance: one covering “electronically delivered amusements” and another covering “nonpossessory computer leases.” Each one takes an existing tax law and extends it to levy an extra 9 percent tax on certain types of online services.

The end result? A 9% tax levied on cloud-based services for Chicago residents and companies. In other words, whether you’re a Chi-town resident who regularly binges Orange Is the New Black on Netflix, or an affiliated business hosting servers for the cloud, you’re getting taxed.

This isn’t actually all that new, as many companies in the cloud have been preparing for new taxes and other means by governments to tax the f*ck out of them. “Jurisdictions around the world, including the US, are trying to figure out ways to tax online services,” Netflix told The Verge. “This is one approach.”

A few critics have taken issue with Chicago’s new tax, unsurprisingly. Some have even cited specific laws, like the Internet Tax Freedom Act (1998), to support impending legislation against it. Considering Emanuel’s city made it this far, it seems likely that the cloud tax is here to stay.