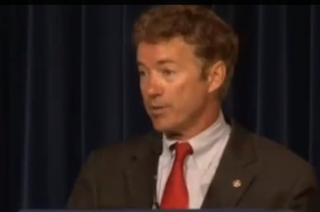 Kentucky Senator Rand Paul took a shot at fellow Republican Senator John McCain‘s controversial trip to Syria, in which the elder legislator posed for a photo with men who may have been involved in the kidnapping of eleven Lebanese Shiites. (McCain’s office denies the alleged identity of the men.)

“I’m very worried about getting involved in a new war in Syria,” Paul said at the Reagan Library on Friday. “People say ‘Assad is such a bad guy.’ He is. But on the other side we have al-Qaida and now Nusra. They say there are some pro-Western people and we’re going to vet them. Well, apparently we’ve got a Senator over there who got his picture taken with some kidnappers, so I don’t know how good a job we’re going to do vetting those who are going to get the arms.”

Related: Louie Gohmert Fumes: If Not For John McCain ‘Benghazi Would Not Have Happened’

“So there’s two ironies you have to overcome if you want to get involved in a war in Syria,” Paul continued. “The first irony is you will be allied with al-Qaida. The second irony is most of the Christians are on the other side, so you may be arming Islamic rebels who may well be killing Christians. Does that make Assad a good person? No. I don’t think there are any good people in this war, and there are some tragically innocent people who are going to be caught in the middle. But i just don’t know that arming one side is going to make the tragedy any less.”