Rapper Azealia Banks to Playboy: ‘I Hate Everything About This Country’ 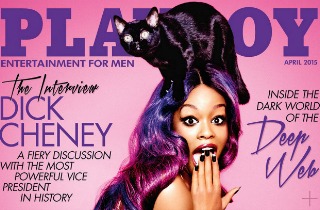 23-year-old rapper Azealia Banks is no stranger to controversy in the music world, but with her upcoming Playboy cover interview she is sure to become fodder for mainstream debates.

“I hate everything about this country,” she told the men’s magazine. “Like, I hate fat white Americans. All the people who are crunched into the middle of America, the real fat and meat of America, are these racist conservative white people who live on their farms. Those little teenage girls who work at Kmart and have a racist grandma — that’s really America.”

She didn’t stop there, however, calling out what she believes is a double standard held between her and 18-year-old white pop star Lorde: “It’s always about race. Lorde can run her mouth and talk shit about all these other bitches, but y’all aren’t saying she’s angry. If I have something to say, I get pushed into the corner.”

Banks has previously called for reparations in America, a point which she claims angered a lot of her white fans. “Why do I have to explain this to y’all?” she said. “My little white fans will be like, ‘Why do you want reparations for work you didn’t do?’ Well, you got handed down your grandfather’s estate and you got to keep your grandmother’s diamonds and pearls and shit.”

On the “loud black bitch” stereotype, she said: “Yeah, I am loud and boisterous. And I am black, and I am a pain in your ass. But I’m not really talking to you, and that’s what makes those people mad. You’re not invited to this conversation. This is not about you.”

And on the state of being black in America, she had this to say: “Young black kids should have their own special curriculum that doesn’t start from the boat ride over from Africa. All you know as a black kid is we came over here on a boat, we didn’t have anything, and we still don’t have anything.”

And watch the Playboy‘s nudity-free behind-the-scenes video from the shoot: