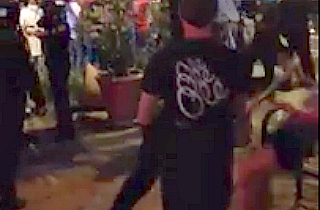 Following their team’s loss to in the NCAA basketball tournament on Saturday night, University of Arizona students took to the streets, as college students do for some reason no one as yet fully understands, where they were met by a full complement of police in riot gear.

As riots go, it wasn’t much to speak of, with little damage reported, 15 arrests, and no serious injuries, according to the Arizona Daily Star. That’s thanks in large part to the brave efforts of hero cops like the one who blindsided a female student who was trying to walk back to her car, as seen in a video taken by student Phoebe Landolt.

“These girls had been trying to get to their car. The girl is on her phone not paying attention and this cop came out of nowhere and just leveled her,” Landolt told the Daily Star. “After that everyone just started yelling and she started crying.” Watch below:

“This isn’t the first time Tucson has been here and dealt with stuff like this,” Sgt. Pete Dugan told KVOA Tucson. “We’ve been hearing all the complaints that we were excessive and things like that as well. Which you’ll be able to see, I think, from what we have, that we gave these dispersal orders over and over and over. And the crowd was not responding to it.”

Similar riots broke out in Dayton, Ohio, last week following the University of Dayton’s run to the Elite Eight.

It’s pretty safe to say rioting over sports victories or losses is stupid. Protesting over excessive police force and brutality, on the other hand, now that seems worth taking to the street for. Just ask the people of Albuquerque.