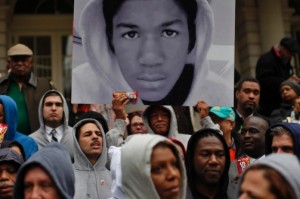 After an initial wave of agreement, a new raft of polling about Trayvon Martin‘s killing is making news, with headlines that all feature variations on the theme that there is a “racial divide” on this story. The implication is that there are divergent, yet equivalent, viewpoints on the racial aspects of this story, but a look at the numbers clearly shows that most white people are, at best, confused, and it’s not hard to see why.

The most glaring figure comes from a USA Today/Gallup poll in which people were asked “Would George Zimmerman have been arrested if the person he shot was white, or do you think (Trayvon) Martin’s race did not make a difference?”

While 73% of black people said Zimmerman would have been arrested had his victim been white, only 33% of white people thought so. The story in that bit of info isn’t “There’s a racial divide,” it’s “67% of white people are wrong.” If George Zimmerman gunned down a Skittle-wielding white kid, he’d be charged faster than a flux capacitor in a lightning storm. If you don’t instinctively know that, the consistent racial disparities in our criminal justice system, particularly with regard to the race of the victim, ought to seal the deal.

Now, you might be tempted to chalk this up to a knee-jerk denial that racism even exists, but another result from the same poll belies that. A sizable majority (57%) of white people thought that racial bias was a factor in the events that led up to the shooting, and the shooting itself.  Eighty-five percent of black people thought so, which is consistent with their response to the earlier question.

It’s possible that white people are just more likely give the benefit of the doubt to law enforcement than to George Zimmerman, except that, after opining en masse that George Zimmerman was at least somewhat motivated by racial bias in the shooting, only 32% of white people felt that Zimmerman was “definitely” or “probably” guilty of a crime, versus 72% of black people on the same question. Are black people just more judgmental? It doesn’t appear so, since 57% of non-black people were happy to judge Zimmerman’s racial bias. So what accounts for these inconsistencies?

A similar poll from the Christian Science Monitor showed almost the same racial disparity, with 73% of black people saying “race played a major role in the shooting death of Trayvon Martin,” versus 36% of white and Hispanic people, but also found that 64% of Democrats believed race played a major role, while just 32% of Republicans thought so. Therefore, a decent chunk of the white people who are paying attention are getting their news from sources tilted in George Zimmerman‘s favor, and against black leaders and protesters, and against the late Trayvon Martin.

But it’s the recent Newsweek/Daily Beast poll that contains the most telling stat. While their poll found the same stark racial disparities about the Trayvon Martin case, and then some, they also asked if the country “is divided by race,” and almost everyone (72% of white people and 89% of black people) agreed that it is. Armed with that knowledge, though, “just 19 percent of whites say that racism is a big problem in America, vs. 60 percent of blacks.”

Here, you have the chicken-or-egg essence of it all. While everyone agrees that there are racial divisions in this country, those 81% of white people are right, racism isn’t a big problem…for them. Consequently, when a racially significant event like the Trayvon Martin killing occurs, most white people don’t pay much attention, because they don’t have to. Their kids will never be Trayvon Martin. That’s just one of many things we’ll never truly understand about being black in America. That lack of understanding, more than overt racists like John Derbyshire, is what drives the racial divisions and resentments in this country, and it’s not because so many of us don’t understand. It’s because so many of us aren’t even trying to understand.