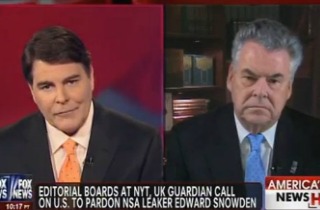 Rep. Peter King (R-NY) tore into the New York Times on Thursday in the wake of the paper’s controversial editorial calling NSA leaker Edward Snowden a “whistleblower” and advising the Obama administration to offer him a deal to facilitate his return from self-imposed exile abroad. King urged Americans to “reject” the Times and to “expose them for the rag that they are.”

King began by saying that he agreed with former NSA Director Gen. Michael Hayden who said Snowden’s leaks jeopardize the safety of Americans and the interests of the U.S. government.

“And for him to be facilitated and promoted by the New York Times to me speaks volumes about the Times,” King added. “They’re a disgrace. Their editors are a disgrace, and I wish they cared more about America than they did about the rights of terrorists’ appeasers.”

King went on to say that Snowden did not pursue the correct channels to be deemed a whistleblower, and his identification of previously secret intelligence gathering programs have not shown to have violated any existing law.

“And yet, the New York Times races to Mr. Snowden’s defense,” King continued. “They don’t care about American lives being lost. They have this narrow, liberal, left-wing ideological point of view.”

“It’s time for Americans to stand up and reject the New York Times and expose them for the rag that they are,” he concluded.