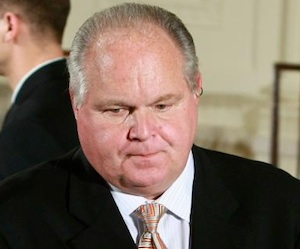 “It may be the first radio station nationally to cancel airings of the program,” the Honolulu Star-Advertiser’s Erika Engle reports. “Regardless of the political views being discussed, New West Broadcasting Corp. President and General Manger Chris Leonard felt the initially degrading comments about Georgetown University student Sandra Fluke, and the escalating comments that followed, were ‘egregious,’ and that ‘decency and responsibility’ dictated the show’s cancellation.”

“I spent a good part of the weekend deliberating this issue,” Leonard said. “Had this been one of my disc jockeys that had made this comment, they would have been terminated.”

Leonard explained further why he felt the show had to be taken off the air:

“We have always encouraged spirited discussion about national and local issues on KPUA and from time to time those discussions may be deemed by some to be objectionable. We are strong believers in the first amendment and have recognized Mr. Limbaugh’s right to express opinions that often times differ from our own, but it has never been our goal to allow our station to be used for personal attacks and intolerance. The most recent incident has crossed a line of decency and a standard that we expect of programming on KPUA whether it is locally produced or a syndicated program like the Rush Limbaugh show. While much of the national debate regarding this issue is now being framed in political terms, the decision for us is one of decency and responsibility. Regardless of one’s political views on the issue being discussed, we feel the delivery was degrading and the continued comments over several days to be egregious. As a result, we are discontinuing the Rush Limbaugh program on KPUA effective immediately.”

WBEC’s General Manager Peter Barry says his station hadn’t yet lost any advertisers as a result of Rush’s comments, and no more than a handful of callers had voiced complaints. But he says over the years he and station staff have grown increasingly uncomfortable with Limbaugh’s rhetoric.

“The nature of Rush’s programming has always presented challenges for us and he’s always pushed the envelope. But this time he’s taken it too far.”