Reporter Quits After Receiving Death Threats: ‘My Physical and Mental Health Were Unraveling’ 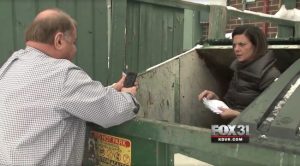 Editor’s note: An update in the form of a provided statement appears at the end of this piece.

—
Heidi Hemmat at KDVR Fox 31 in Denver has largely covered business fraud as an investigative journalist for her station, and Hemmat’s years of work have even yielded six Emmy Awards. In February 2015, Hemmat quite literally went dumpster diving at a local business, telling the enraged business owner, “We’re looking at all the receipts you threw away,” when confronted:

Hemmat promptly responds, “You probably should. They asked you not to throw these receipts away.”

Apparently, the business owner in that story would go on to make a threat against Hemmat’s life so credible that the man’s therapist broke HIPPA laws to inform Hemmat directly. And now, Hemmat has left Fox 31 abruptly and is now telling her story, claiming the station did not do enough to protect her life.

“The consumer fraud charges and criminal case against him were the result of a 4 part investigation–I worked very hard to expose this guy–and in the end, I paid a very high price,” Hemmat wrote yesterday.

She further details the sense of panic that overcame her when the therapist informed her of the business owner’s threats:

The psychiatrist thought the threat was so credible, she broke HPPA laws (the laws that protect medical records of psychos, such as the theater shooter–James Holmes) to warn me. She informed me he was on a “72 hour mental hold” but because it was 4th of July weekend, (2015) he would likely be released before then. She then asked me if I had somewhere else I could go because he knew where I lived and of course, where I worked. I remember the chill than ran from the top of my head to the soles of my feet. Of course I had nowhere to go! I have 2 children, then 1 and 3, I couldn’t just leave on a whim –where would I go?

Hemmat alleges that her employers at Fox 31 “downplayed” the threats. Despite her years of outstanding work, she acknowledges that things have changed severely, further justifying her move. “Society has changed. People have changed. My physical and mental health were unraveling. As soon as that ratings period ended I took an unpaid leave of absence, and in August I asked to be let out of my contract. My boss sent out a note to the staff that failed to acknowledge my 15 years of service at KDVR, the 6 Emmy awards I had won for the station or the fact that I had literally put my life on the line. It just said ‘Heidi is no longer an employee of FOX 31.'”

Hemmat wrote her lengthy open letter on Thanksgiving Day, writing at one point, “I write with this with tears in my eyes, because I have so much to be thankful for.”

“I have spent more time with my kids in the past 6 months than in the entire 4 years of my son’s life. My kids are happy, my husband is happy, our marriage is stronger than ever,” she continues. “Words cannot express my gratitude.”

—
UPDATE: In a statement provided to Mediaite, Joan Barrett, the Vice President and General Manager of KDVR & KWGN said, “These accusations are unequivocally false, we took Heidi’s concerns very seriously and provided her with support, security and an attorney, for which Heidi expressed her appreciation. To be clear, we never denied a request for additional security. We are disappointed Heidi has chosen to view the circumstances differently and disparage the station.

We wish her nothing but the best during what appears to be a continued difficult time.”