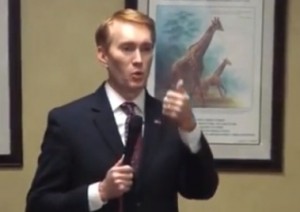 Republican desperation to shift the post-Newtown focus away from sensible gun regulation has finally found equilibrium with their contempt for the poor and the disabled, as GOP Congressman James Lankford (R-not OK) demonstrated to constituents earlier this month. ThinkProgress flagged a Q&A session in which Rep. Lankford agrees with a constituent that the real culprit is not guns, but “psychotropic drugs,” which Lankford then explains are all a scam by “welfare moms” to get their kids “on Social Security disability and get a separate check.”

CONSTITUENT: My question is regarding the guns and is Washington at all aware of the psychotropic drugs that these children are taking? I guarantee it 100 percent that’s our big problem. […]

LANKFORD: I agree with that. I think there’s a bunch of issues that, quite frankly, most liberals are afraid to talk about. […] Where are we on all those psychiatric drugs? We’ve overmedicated kids. Quite frankly some of the overmedication of kids are because welfare moms want to get additional benefits and if they can put them on SSI through maintenance drugs, they can also put them on Social Security disability and get a separate check. That is wrong on every single level. Not only is it fraudulent to the government, but it also tells a kid with great potential, “don’t try because you’re disabled.”

ThinkProgress’ Scott Keyes makes quick work of the assertion on its face by pointing out that any and all SSI fraud is rare, and the report they link to actually shows the program is more likely to underpay than to overpay:

The Congressman’s claim is a clear demonstration of why it is that President Obama’s second inaugural address seemed so “progressive” to the media, because he’s standing next to people who are barely past “Witch Trials” on the gauge of human progress, but there’s something deeper at work, too.

This idea of evil welfare parents harming their children to get a check has an obvious appeal to a party that has become the Passion Of The Christ of whipping poor people, but in this case, they have been abetted by more “legitimate” types. The Boston Globe ran a series of articles that hyped SSI as “The Other Welfare,” forcing parents to dope their kids in order to get on the dole. But in every case they reported, the children receiving benefits actually were disabled, as in the case of Geneva Fielding’s son:

…neighbors told her about a federal program called SSI that could pay her thousands of dollars a year. The benefit was a lot like welfare, better in many ways, but it came with a catch: To qualify, a child had to be disabled. And if the disability was mental or behavioral — something like ADHD — the child pretty much had to be taking psychotropic drugs.

Fielding never liked the sound of that. She had long believed too many children take such medications, and she avoided them, even as clinicians were putting names to her boys’ troubles: oppositional defiant disorder, depression, ADHD. But then, as bills mounted, friends nudged her about SSI: “Go try.’’

Eventually she did, putting in applications for her two older sons. Neither was on medications; both were rejected. Then last year, school officials persuaded her to let her 10-year-old try a drug for his impulsiveness. Within weeks, his SSI application was approved.

“To get the check,’’ Fielding, 34, has concluded with regret, “you’ve got to medicate the child.’’

The article goes on to explain, however, that Ms. Fielding herself admits, several times, that her son has benefited from the medication. If there is an unintended incentive to get kids on medications, the Globe report fails to demonstrate that those medications weren’t necessary. It’s anecdotal evidence of nothing.

This led Republicans in Congress to demand that the valuable program be fine-tuned. Just kidding, they used the report as an excuse to gut SSI funding: (emphasis mine)

Republicans in Congress are not waiting for the results of the GAO study; they have twice proposed limiting SSI benefits.  The House budget resolution passed earlier this year by Republicans, for example, proposed that the government could save $1.4 billion over 10 years by reducing incentives in the SSI program “for parents to place their children on medication solely to receive SSI benefits.” The resolution didn’t mention ADHD, but it was specifically cited in a separate budget proposal by Rep. Eric Cantor, R-Va., during the debt ceiling debate.

Neither proposal provided details of how the savings would be achieved, and a preliminary study from the Social Security Administration found that children with ADHD taking medication were not more likely to be approved for benefits than those who were not medicated. It’s unclear whether any savings would result from the proposals.

The incentive to medicate children, you see, is as imaginary as Republican “concern” over mental health, which will either evaporate once the Newtown moment passes, or will be perverted into a means to screw over the mentally ill and disabled, and especially the poor. They have even found an ally in New York Times columnist Nick Kristof, who, last month, suggested gutting SSI because someone told him a story about parents in Kentucky keeping their kids illiterate to get government checks. Even if you believe that story, and that such abuse is statistically significant, how is punishing kids who are actually disabled the answer?

If you’re a Republican like James Lankford, it’s killing two birds with one stone: keeping the portable arsenal trade free and open, and cutting off benefits to poor, disabled children who desperately need them. Makers and takers.