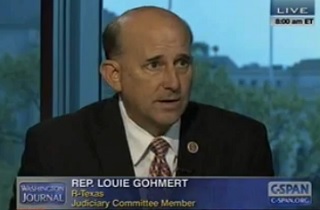 The bombing of the Boston Marathon has spurred a renewed round of pushback from immigration opponents, hoping to stoke fear of immigrants using early reports of a now-cleared “person of interest” who is a Saudi national. On C-Span’s Washington Journal Wednesday morning, frequent fanciful flyer and monger of “Terror Babies”™ Rep. Louie Gohmert said that “We know Al Qaeda has camps with the drug cartels on the Mexican border,” and that “we know that people are now being trained to come in and act like Hispanic, when they are radical Islamists.”

Earlier in the interview, Gohmert dismissed reports that the FBI has completely cleared the Saudi student who was reported to be a “person of interest” in the Boston Marathon bombing, but whom authorities said all along was not a suspect. In this clip, Gohmert says that “when you have the greatest liberties, you will draw people that want to destroy you,” and later adds that “We know al Qaeda has camps on the Mexican border. We that people are now being trained to come in and act like Hispanic, when they are radical Islamists. We know these things are happening. It is insane not to protect ourselves to make sure that people have the freedoms we have.”

With high-profile Republicans failing spectacularly at minority outreach, and others distastefully seizing on the Boston Marathon attack to score political points, Rep. Gohmert has pulled off a double-whammy, exploiting a discredited report about the bombing, while simultaneously labeling anyone who “acts Hispanic” as a potential terrorist.