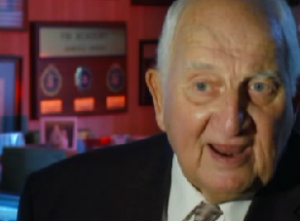 Yes, Fox 8 in Cleveland is reporting that Don Adams, a retired FBI agent claims to have proof that Lee Harvey Oswald isn’t guilty of killing John F. Kennedy. Instead, Adams blames Joseph Adams Milteer, whom he had investigated shortly before the assassination. His claims seem to be, in part, that the Fed was so embarrassed that they missed Milteer’s warning signs (Adams has tapes of Milteer bragging that the best way to kill the president would be “from an office building with a high powered rifle.”) that they covered up his involvement. In the grand scheme of JFK conspiracies, this one’s a little on the plain side. To be honest though, I don’t like any conspiracy that doesn’t involve at least one sentient robot.

Still though, Adams has a lot of evidence so, if this is your kind of thing, check out the Fox 8 news report below. If this isn’t your thing, then the report will probably just feel like a rehash of Oliver Stone’s JFK with less famous actors and more cheesy animated bullet holes. It is a fun, intriguing segment in general, even if it doesn’t cover my favorite part of the Oswald story; his rocking band.

You can also check out Adams’ website where he’s selling a DVD on the subject. Just don’t let, y’know, the man find out you’re watching it.