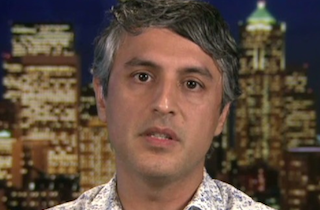 Reza Aslan is the celebrated author of such books as Beyond Fundamentalism: Confronting Religious Extremism in the Age of Globalization

and No god but God: The Origins, Evolution, and Future of Islam

as well as a frequent guest on Real Time with Bill Maher. But at this point in his career, he may be best known for a combative interview he did on FoxNews.com last summer, during which anchor Lauren Green asked him why, as a Muslim, he should be writing a book about Jesus Christ

Now, Aslan could be adding the role of CNN host to his resume. On Friday, he ended a brief back and forth with CNN’s Jake Tapper on Twitter with this message:

@jaketapper PS. Just sold a show to CNN so I'll be seeing you a lot more hopefully :)

Asked (by me) to provide more details, Aslan declined, saying more information would be coming soon:

@TheMattWilstein not yet. Soon

We have reached out to CNN for comment and will update this post accordingly if/when they respond.

In addition to the possible new show on CNN, this week Deadline reported that Aslan’s most recent book, Zealot: The Life and Times of Jesus of Nazareth

, will be turned into a film by producer David Heyman, who worked on all eight of the Harry Potter movies.

The bestselling historical account of the life of Jesus Christ was acquired by Lionsgate in December. Former Focus Features chief James Schamus will be writing the adaptation. A director and cast have yet to be announced.

We are in negotiations with him for a possible series on CNN.