Rick Perry Tells Bisexual Teen Why He’s Opposed To Gays In The Military: Homosexuality Is A Sin
video

Rick Perry Tells Bisexual Teen Why He’s Opposed To Gays In The Military: Homosexuality Is A Sin 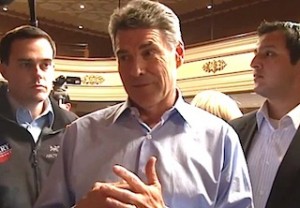 With the Iowa Caucuses just two weeks away, GOP presidential hopefuls are hitting the campaign stops hard. At the end of a stop last night in the town of Decorah, Governor Rick Perry found himself confronted by a 14 year-old girl asking why the Texas governor was so opposed to gays serving in the military (a theme that was front and center in one of his recent campaign ads.) Perry handled the confrontational question calmly, but in a way that is unlikely to bridge the divide between his supporters and his detractors, particularly on the issue of tolerance of Gay Americans.

The event only continued a turn for the negative as a girl approached Perry as he was shaking hands to ask him why he opposed gays serving openly in the military. Her question ended with a charged clause: “and why you want to deny them their freedom when they’re fighting for your rights.”

What Perry didn’t know during the exchange was that the girl is herself openly bisexual. “This is about my faith, and I happen to think that there are a whole host of sins, homosexuality being one of them,” Perry said, adding that he himself was “a sinner” so he wouldn’t “be the first one to throw a stone.” Reflecting on another question he had received this week about how he would feel if his own child were gay, Perry said, “I’d feel the same way. I hate the sin but I love the sinner.”

An awkward soundbite can easily be pulled from the following video clip, when Perry basically calls homosexuality a sin and then quickly admits that he is a sinner in what seems to be the same thought, though his admission of being a sinner is a predicate to the larger concept that he won’t be judgmental, or “be the first one to throw a stone.” That said, detractors will certainly be quick to point out that calling homosexuality a sin and denying their rights to serve in the military (or marry one another) are their own sorts of thrown stones.

Watch the clip below, courtesy of National Journal: