Rick Sanchez On Bullying: “A Psycho Babble Media Term That We’ve Made Up” 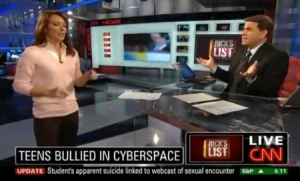 If you haven’t yet heard the incredibly sad story of 18 year old Tyler Clementi, here’s the gist. Clementi, was a shy freshmen at Rutgers University and an expert violinist. His roommate, Dharun Ravi, apparently uncomfortable with having a gay roommate, decided it would be hilarious to secretly videotape Clementi having sex and then stream it live on the internet, inviting all of his friends to watch through Twitter. Ravi and his accomplice, Molly Wei, have now been arrested but only after Clementi killed himself, jumping off the George Washington Bridge three days after the incident. Meanwhile, on CNN, Rick Sanchez couldn’t be persuaded that this disgusting affair reeeeeally qualified as “bullying.”

While we can respect Sanchez taking some unpopular stances on this story (he makes some good points about the slippery slope of trying to charge Ravi and Wei with Clementi’s death instead of merely invasion of privacy) his opinions on “bullying” are just weird. He doesn’t just believe that this isn’t bullying, he appears to not believe bullying is a real thing to begin with.

Sanchez frequently is criticized by people as being a bit of a “meathead.” This is unfair. Still though, if he wants to escape that impression, he probably shouldn’t go on TV and claim that bullying doesn’t exist while doing a report on a dead teenager.

For more on the heartbreaking tale of, yes, bullying, please read here.