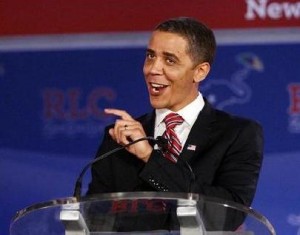 It must be a slow news day, because the big story of the moment continues to be the controversy surrounding a comedy routine delivered by Obama impersonator Reggie Brown at yesterday’s Republican Leadership Conference held in Louisiana. RLC President & CEO Charlie Davis released a statement saying he thought some of the jokes made were too inappropriate for the setting.

He cracked some jokes at the expense of the president, including some of a racially sensitive nature. As Obama, he talked about celebrating only half of Black History Month, and quipped that while his mother loved a black man, “she was not a Kardashian.” A picture of Sanford from “Sanford & Son” was shown when Brown, as Obama, joked what he would look like at the end of his presidency.

His monologue was cut short during a joke about Michele Bachmann, and naturally it was assumed that Brown was pulled for his jokes about the Republican candidates. Brown denied these allegations, telling CNN that he was pulled for going over his allotted 20 minutes. He also defended himself against critics who thought his jokes about Obama’s race crossed a line, and said the president has a “great sense of humor.”

One of these critics, Republican Leadership Conference President Charlie Davis, insisted he wouldn’t have let Brown continue had he known the nature of his remarks. His statement:

The RLC is designed to showcase the top Republican leaders and ideas in the country – to talk about limited government, fiscal responsibility and rebuilding the American economy.

Had I been in the room I would have pulled him sooner. We have zero tolerance for racially insensitive jokes. As soon as I realized what was going on I rushed backstage and had him pulled.

Davis alleges that he did not know Brown’s routine before he performed it, but on MSNBC today, Brown said he rehearsed his routine ahead of time and no one seemed to have a problem with his remarks.