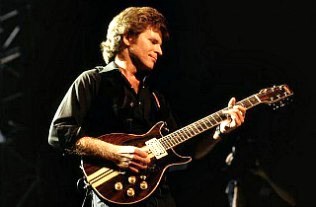 During a recent interview with comedian Marc Maron, rock legend John Fogerty explored his political leanings, expressing a bit of “libertarian” nuance beyond his reputation as a “liberal Democrat” from the “hippie” era.

Fogerty’s appearance on Monday’s episode of “WTF with Marc Maron” briefly took a turn for the political when Maron brought up the Creedence Clearwater Revival frontman’s classic 1969 protest song “Fortunate Son.” The rocker explained that the song was about the Vietnam War, but also about the broader themes of “privilege” and the fact that wealthy politicians declare the war and then demanded poorer men fight on their behalf.

Asked whether he agreed with the overarching “hippie” philosophy of the 1960s, Fogerty explained: “The idea of — certainly being a liberal person is who I am — thinking that we have an obligation to our fellow man. The idea of trying to care for the less fortunate. You know, these were all pretty much liberal Democrat precepts, at least, in the 50s and 60s when I grew up.”

But that clear political definition has become “blurred” for Fogerty, as he explained to Maron that “I’d still loosely call myself a Democrat, but you know, I realize I’m kind of a lot more like some kind of libertarian or something.”

Ah, so that bit of nuance may explain what many have interpreted as a stab at government excess in “Who’ll Stop the Rain“:

“Caught up in the fable I watched the tower grow / Five year plans and new deals wrapped in golden chains / And I wonder still I wonder who’ll stop the rain.”

“I very much agreed with the hippie philosophy,” he continued to Maron:

“But the lifestyle, you know, the idea of being stoned all day and laying around and thinking that somebody else is going to take care of you.. You know, I had a big argument with a guy while I was in the army. He said, ‘Oh no, man. I’m going to move to the desert and I won’t have to do anything.’ I said, ‘well everybody else’s gonna have to pay your way, man. You know, the army’s protecting you. The police, the welfare that’s gonna bring you food. That ain’t right.’

He concluded: “I mean, I’ve always thought you’re supposed to take care of yourself and bring yourself up by your bootstraps. I think that’s my parent’s generation teaching me. But the idea that we’re obligated to our fellow is certainly ingrained in me.”

Listen below, via WTF with Marc Maron: