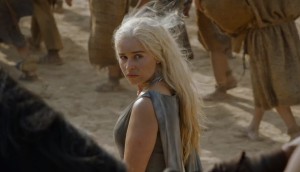 Spoilers for Game of Thrones Season 6, Episode 1: “The Red Woman.”

This is Jaime Lannister’s strongly worded response to his sister’s hand-wringing over an old witch’s words of warning. But it could just as easily be the liberated battle cry of Game of Thrones co-creators D. B. Weiss and David Benioff coming unshackled from George R. R. Martin‘s books. Because after five seasons, their show finally overtook its source material, and as “The Red Woman” kicks off Season 6, they are now — like Sansa and Theon leaping off the parapets of Winterfell into a great snowy unknown — free to take the story in new, uncharted courses. Fuck fate, indeed.

And while we’re at it — fuck fans’ expectations.

Anyone expecting to see Jon Snow zapped back to life was treated to a series of languid close-ups examining his pale, drained, and deceased face. And anyone who put their chips on the red priestess of the title reviving him saw instead a somber final scene in which Melisandre abjured her rough magic, and revealed her true face (and body): The fiery acolyte of the Lord of Light we met in Season 2 is gone and she’s replaced by a centuries-old crone who has about as much faith in prophecy as Jaime at this point.

This episode was in many ways about confounding expectations. In Dorne, Doran Martell was betrayed and murdered by Ellaria Sand, to whom he ill-advisedly offered absolution and a second chance last year. Meanwhile, two of Sand’s daughters somehow caught up with Jaime’s ship docked outside King’s Harbor and impaled Doran’s son right through the skull. And so the locus of the most plodding and baffling subplot of last season is finally starting to catch fire.

On the other side of the world, in Meereen, Tyrion Lannister is taking stock of the “grand old city” on the brink of civil war when he sees that someone has torched the city’s harbor. “We won’t be sailing to Westeros anytime soon,” he quips, throwing some water on that long-simmering plotline.

But if the season six premiere was not hamstrung by the prescriptions of the novels, it was weighed down by the sheer volume of its diffuse, endlessly metastasizing subplots. “The Red Woman” felt at times like a protracted roll call for a class that hasn’t really started yet.

Of course, that’s par for the course for season premiers. Especially in a show that has grown has complex and varied as GoT. Uncharacteristically for this show, Season 5 concluded with a smattering of cliffhangers, and it falls to “The Red Woman” to obligingly check in to see how everyone fared: Sansa and Theon survived their leap and finally hooked up with Brienne, the High Sparrow is playing good cop to Septa Unella’s bad and is working a long con on Queen Margery Tyrell’s soul, blind Arya is begging for lunch money only to have it beaten out of her in the alleys of Bravos by the Waif, Daenerys is on her way to Vaes Dothrak to live out her days with the widows of other dead Khals, and so on.

Meanwhile, many of the developments of the sixth season that were highly anticipated (and expected) were kept offstage: The much-heralded resumption of the Iron Islands intrigue, the flashbacks to Robert’s Rebellion, the return of Brandon Stark under the tutelage of the Yoda-like Three Eyed Raven, the Night King and his army of the dead, the dragons.

“The Red Woman” is very much a housekeeping episode, all reintegration and set-up. But it’s also a sneaky reminder that the rules have changed, and this is a show that — more than ever — threatens to surprise us.

We’re curious to know what you thought of “The Red Woman,” and what you expect for Season 6 of Game of Thrones. Please let us know in the comments.