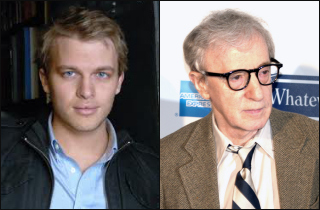 Holy crap, Ronan Farrow is dead serious in his dislike for his estranged father Woody Allen.

Allen received the Cecil B. DeMille Lifetime Achievement Award tonight at the Golden Globes, and boy was Farrow was unimpressed.

“Missed the Woody Allen tribute,” he tweeted, “did they put the part where a woman publicly confirmed he molested her at age 7 before or after Annie Hall?”

Missed the Woody Allen tribute – did they put the part where a woman publicly confirmed he molested her at age 7 before or after Annie Hall?

For background: After Allen married actress Mia Farrow, they adopted two children including a girl they named Dylan. During the couple’s nasty divorce proceedings (which included details of Allen falling in love with Farrow’s adoptive daughter Soon-Yi, his future wife), accusations emerged that Allen had sexually molested Dylan when she was seven years old.

In October 2013, Dylan (now known as Malone) publicly confirmed those charges for the first time, telling the press she fears Allen and wishes she could testify against him.

The whole thing is very “Yikes,” and forthcoming MSNBC host Farrow seemingly has no qualms letting his anger be known. To add fuel to the bizarre saga that is Woody Allen’s family life, last year Mia Farrow suggested to the public that Ronan may be the son of the late Frank Sinatra, among many other possibilities that do not include Woody.

If you’re wondering how Mia expressed her disgust with Woody on the evening of him receiving such a prestigious award: She took a more passive route just as he was about to be honored…

Time to grab some icecream & switch over to #GIRLS