Rush Limbaugh: ‘How Many People Really Think Of Obama As Black?’ 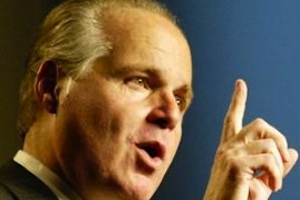 Barack Obama has a “chip on his shoulder,” according to Rush Limbaugh, and it’s something that affects every policy decision he makes. That chip is his race. However, Limbaugh explained, Obama’s probably the only person who’s thinking about it.

What caught Limbaugh’s attention was a passage in Kenneth T. Walsh’s book, Family of Freedom: Presidents and African Americans in the White House, which details a meeting Obama had shortly after his election. In the meeting he alluded to a racial undercurrent in the resistance to his presidency. One thing that annoyed Limbaugh is that Obama would only discuss the issue behind closed doors, something that made him the “leader of the coward parade,” in reference to Eric Holder’s famous “nation of cowards” quote. Also, Limbaugh denied this undercurrent since, as he explained, no one really even sees Obama as black.

“Let me ask you a question. How many people really think of Obama as black? I mean, apart from Chris Matthews who’s obsessed with that. One of Obama’s parents is black. Undeniable. But he was raised by a white mother, by white grandparents. He went to a highly exclusive private school in Hawaii with rich, white students and white teachers. He went to exclusive colleges that were practically lily-white. Barry Obama is from a very white, albeit radically Left, cultural background. He’s not from the ‘hood. He’s not from the Movement.”

Limbaugh summarized by pointing out that, while Obama refuses to really discuss this issue that he thinks about so much, Limbaugh gets blamed for bringing up race even when he doesn’t. Ahem.