Rush Limbaugh: What if Al Qaeda is ‘Framing’ Bashar al-Assad in Syria? 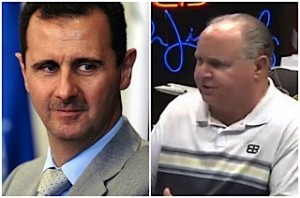 As Congress begins to debate military action in Syria and Republicans begin to line-up behind President Obama, Rush Limbaugh took to the airwaves this morning to offer an alternative outlook on the whole situation. What if Al Qaeda, posing as the Syrian rebels, Limbaugh asked, is simply “framing” Bashar al-Assad by using chemical weapons of their own?

Limbaugh summed up the pro-intervention conservative talking points as “We cannot allow this guy, Bashar al-Assad, to nerve gas his own people with impunity. Otherwise, we don’t stand for anything.” In other words, “Give the president what he wants for the sake of America.”

After questioning Obama’s decision to wait for congressional approval after stressing the urgency of the situation in Syria, Limbaugh asked, “What if Bashar didn’t do it? What if Bashar is being framed?”

He proceeded to equate Al Qaeda with the Syrian rebels and accused them of “setting off chemical weapons on their own people” in order to get the United States “mobilizing to get rid of Bashar, because they can’t for some reason.”

In Limbaugh’s version of events, “They use chemical weapons on their people. It gets blamed on Bashar. We go in and take Bashar out, or do something, and end up on the same side as the rebels, in this case, Al Qaeda.” He Assad “just wouldn’t” gas his own people because “what’s in it for him besides what’s happening right now?”

To his credit, Limbaugh did end his riff by admitting everything he was saying was “speculation.”

Listen to audio below, as clipped by Mofo Politics: