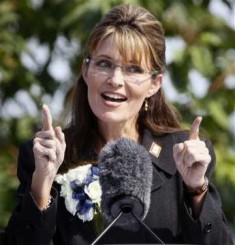 There is still a week to go before Sarah Palin’s much-anticipated interview with Oprah Winfrey next Monday, which will also likely serve as the starting shot in the Sarah Palin media blitz/beginning days of the 2012 campaign season that is sure to last till Christmas.

No doubt Oprah has been working on her interview questions for quite some time now (presumably since August 29, 2008), but it will be interesting to see which way, if any, Palin attempts to point the headlines ahead of her headline-making interview. As of today, the money appears to be on “death panels.”

In a posting on her Facebook page this weekend titled ‘The Pelosi Bill Was Rammed Through on Saturday, But Sunday’s Coming’ (side note: that is a great hed) (side note #2: if we are allowed to vote via Facebook in 2012 Palin is going to have an edge on the competition) Palin had this to say:

Now we can only hope that Rep. Stupak’s amendment will hold in the final bill, though the Democratic leadership has already refused to promise that it won’t be scrapped later. We had been told there were no “death panels” in the bill either. But look closely at the provision mandating bureaucratic panels that will be calling the shots regarding who will receive government health care. Look closely at provisions addressing illegal aliens’ health care coverage too.

She alluded to the infamous (and fictitious) panels again in a pro-life speech in Wisconsin, that Politico’s Jonathan Martin apparently attended despite the fact it was closed to the press. Per Politico:

The former Alaska governor and 2008 Republican vice presidential nominee asserted that if policy-makers don’t believe a child in the womb is valuable, then “perhaps the same mind-set applies to other persons.”

“What may they feel about an elderly person who doesn’t have a whole lot of productive years left…In order to save government money, government health care has to be rationed… [so] than this elderly person that perhaps could be seen as costing taxpayers to pay for a non-productive life? Do you think our elderly will be first in line for limited health care? And what about the child who perhaps isn’t deemed normal or perfect per someone’s subjective measure of their use or questionable purpose in the eyes of a panel of bureaucrats making our health care decisions for us.”

The Death Panel meme has certainly been a successful one thus far for Palin, moreover it’s probably a preview of the sort of campaigning we can expect to see from the former Governor going forward, but reviving it so close to her big Oprah interview (not the mention the Barbara Walters one shortly thereafter) makes one wonder if she is not setting herself up for a extra thorough vetting on national TV come next week.